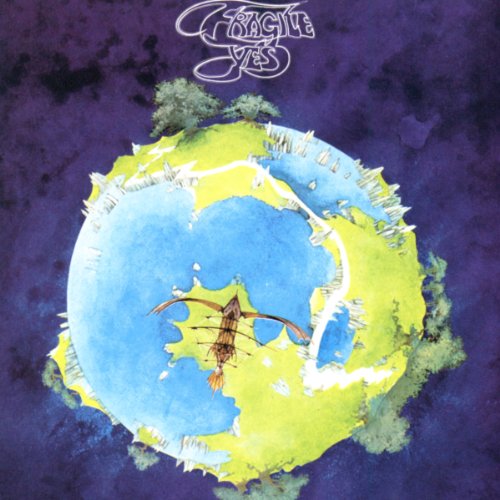 Fragile is the fourth studio album by the English progressive rock band Yes, released in November 1971 by Atlantic Records.

Fragile was Yes’ breakthrough album, propelling them in a matter of weeks from a cult act to an international phenomenon; not coincidentally, it also marked the point where all of the elements of the music (and more) that would define their success for more than a decade fell into place fully formed. The science-fiction and fantasy elements that had driven the more successful songs on their preceding record, The Yes Album, were pushed much harder here, and not just in the music but in the packaging of the album: the Roger Dean-designed cover was itself a fascinating creation that seemed to relate to the music and drew the purchaser’s attention in a manner that few records since the heyday of the psychedelic era could match. Having thrown original keyboard player Tony Kaye overboard early in the sessions — principally over his refusal to accept the need for the Moog synthesizer in lieu of his preferred Hammond organ — the band welcomed Rick Wakeman into its ranks. His use of the Moog, among other instruments, coupled with an overall bolder and more aggressive style of playing, opened the way for a harder, hotter sound by the group as a whole; bassist Chris Squire sounds like he’s got his amp turned up to “12,” and Steve Howe’s electric guitars are not far behind, although the group also displayed subtlety where it was needed. The opening minute of “Roundabout,” the album opener — and the basis for the edited single that would reach number 13 on the Billboard charts and get the group onto AM radio in a way that most other prog rock outfits could only look upon with envy — was dominated by Howe’s acoustic guitar and Bill Bruford’s drums, and only in the middle section did the band show some of what they could do with serious amperage. Elsewhere on the record, as on “South Side of the Sky,” they would sound as though they were ready to leave the ground (and the planet), between the volume and intensity of their playing. “Long Distance Runaround,” which also served as the B-side of the single, was probably the most accessible track here apart from “Roundabout,” but they were both ambitious enough to carry most listeners on to the heavier sides at the core of this long-player. The solo tracks by the members were actually a necessity: they needed to get Fragile out in a hurry to cover the cost of the keyboards that Wakeman had added to the group’s sonic arsenal. But they ended up being more than filler. Each member, in effect, took a “bow” in mostly fairly serious settings, and Squire’s “The Fish” and Howe’s “Mood for a Day” pointed directly to future, more substantial projects as well as taking on a life of their own on-stage. If not exactly their peak, Fragile was as perfect a record as the group would ever make, and just as flawless in its timing as its content.