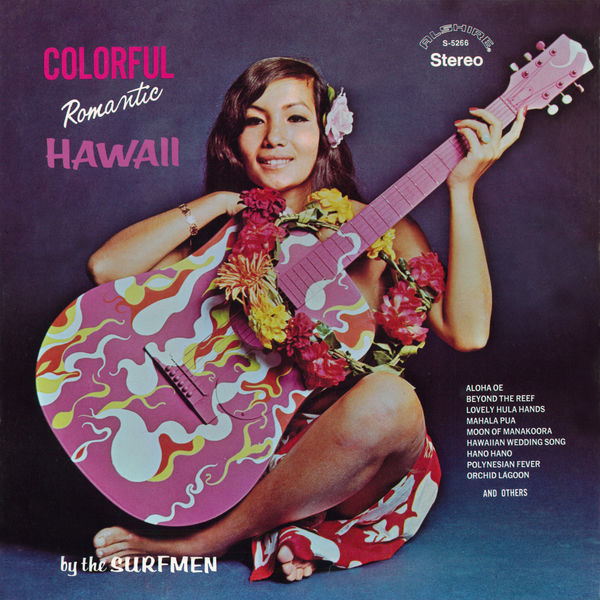 The Romantic Lure Of Hawaii is the second and last album by the Exotica supergroup The Surfmen, released in 1963 on David L. Miller’s Somerset label. If one considers the group’s first album The Sounds Of Exotic Island (1961) which is hailed as one of the most vivacious and multilayered Exotica works of all times, chances are good that their sophomore album offers more of the same bongo beats, tropical birdcalls, paradisiac flutes and gentle piano arrangements, right? Alas, yes. It offers more of the same! This album cannot camouflage the origin of Miller’s Somerset label as a budget label. It is, firstly, reissued under different names and in ever-changing track orders, ranging from titles such as The Surfmen In Hawaii and The Romantic Lure Of Hawaii, comprising eleven or 12 tracks.

Well, arbitrary – or better still: alatoric – naming conventions are quite common; the Crown label, for instance, is notorious for its various titles of Milt Raskin’s Kapu (1959) or Don Ralke’s and Buddy Collette’s Bongo Madness (1957), but The Romantic Lure Of Hawaii has a much bigger problem than just its iridescing track orders and album titles: it recycles its material! A whopping five tracks of eleven are taken from The Surfmen’s debut album. Even worse, the new material that made it onto the album is rather pale, as it is played by a trio instead of a septet or octet. The new cuts are Hapa Haole tunes and thus much more reduced and limited. In-between these tunes, the flamboyant bliss of the debut album shimmers through. If I have not been clear enough, I rephrase the aforementioned bits of information: The Romantic Lure Of Hawaii is a largely recycled album that wants the listener to pay for songs he already purchased via The Sounds Of Exotic Island. As stated before, the Somerset label was a budget label. You would never notice this when you listen to the debut, but here on this album the fact is figuratively screamed at one’s face time and again. Are there any good parts which do not derive from the debut? Let’s see…