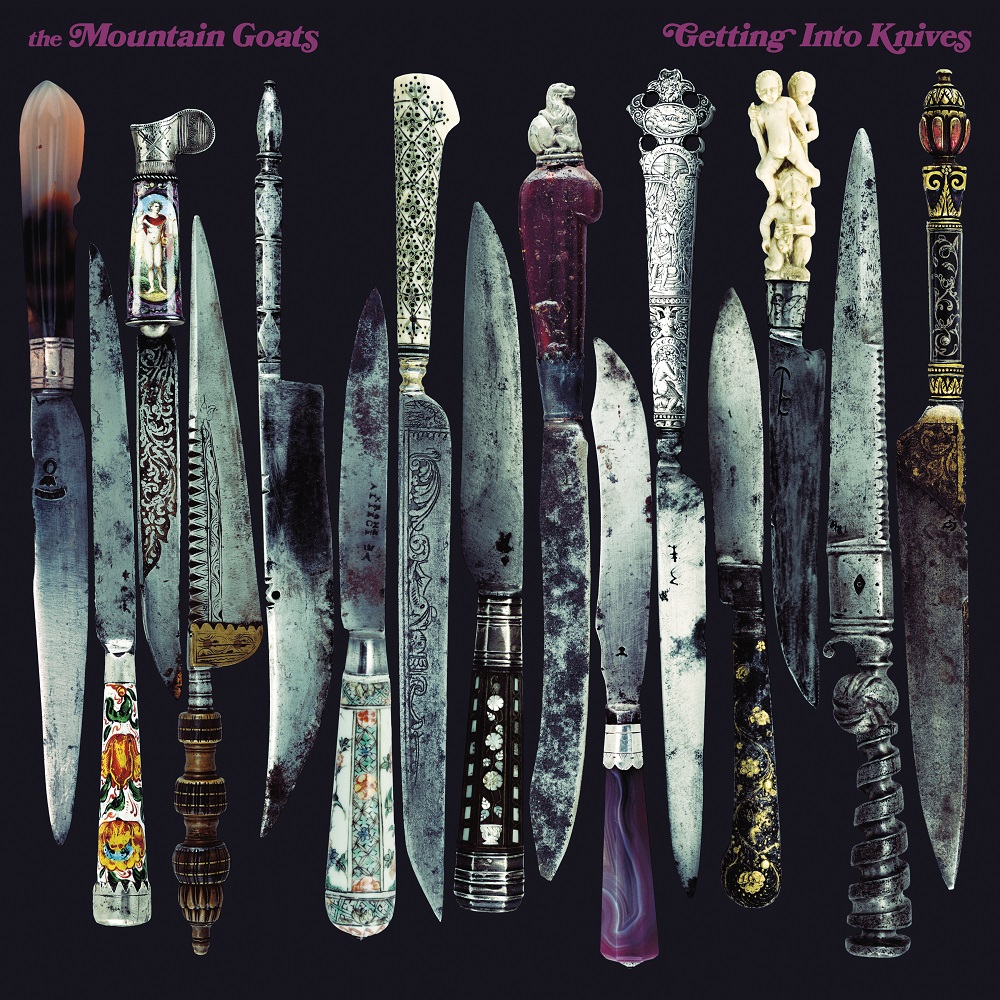 On the first of March, 2020, John Darnielle, Peter Hughes, Matt Douglas, and Jon Wurster, aka the Mountain Goats band, visited legendary studio Sam Phillips Recording in Memphis, TN. Darnielle armed his band with new songs and reunited with producer Matt Ross-Spang who engineered last year’s In League with Dragons. In the same room where the Cramps tracked their 1980 debut album, the Mountain Goats spent a week capturing the magic of a band at the top of its game. The result is Getting Into Knives, the perfect album for the millions of us who have spent many idle hours contemplating whether we ought to be honest with ourselves and just get massively into knives. Getting Into Knives includes guest performance on Hammond B-3 organ by Charles Hodges (of numerous Al Green records) and guest performance on guitar by Chris Boerner (of the Hiss Golden Messenger band).

Let’s get the first big question out of the way: No, Getting into Knives is not a concept album about knives. Even casual observers are aware by now that lead Mountain Goat John Darnielle loves few things more than a set of songs unified by a particular theme. But after regaling us with stories of professional wrestlers, goths struggling with maturity, fantasy role-playing games and the people who love them, or French history, this time Darnielle and his cohorts have given us a set of 13 songs about as many different characters, all trying to move forward in their lives and make sense of the world around them. While these people don’t have anything particular in common, that doesn’t mean Darnielle has gotten lazy or lost focus; as befits his status as a published author, Getting into Knives plays like a collection of short stories, with a similar unifying feel but a different angle of attack for each chapter. These are people aiming high in life, with some sounding confident but reasonable and others possibly deluded yet unafraid. Darnielle’s songs are unusually literate and thoughtful without seeming forced or pretentious, and with time he’s become a composer whose music is as effective as his verse. Getting into Knives may well be the best-crafted and most musically satisfying album the Mountain Goats have released to date. Cut in Memphis in March 2020, it finds John Darnielle and his core trio — Peter Hughes on bass, Matt Douglas on keyboards, woodwinds, and guitars, and Jon Wurster on drums — playing with the sure-footed interplay of a crack jazz band, even as the melodies are rooted in pop. The easy but vital nuance of the arrangements is reinforced by the welcome interludes from the guest musicians (including Charles Hodges of the legendary Hi Records house band on organ), and Darnielle has learned how to sing with an authority that matches the skill set of the band and gives his characters life and personality. Songs for Pierre Chuvin, released earlier the same year, demonstrated that Darnielle isn’t afraid to go back to his lo-fi roots when fate forces his hand, but Getting into Knives reminds us he’s at the peak of his abilities in the art of record-making, and reminds us it’s possible for a band to be brilliant without a shred of arrogance. – Mark Deming