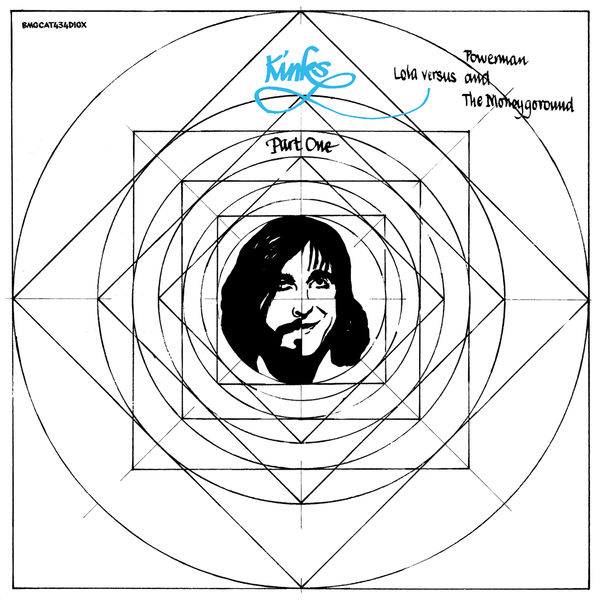 Kinks – Lola versus Powerman and The Moneygoround, Part One, commonly abbreviated to Lola Versus Powerman, or just Lola, is the eighth studio album by British rock band the Kinks, recorded and released in 1970. A concept album, it is a satirical appraisal of the music industry, including song publishers, unions, the press, accountants, business managers, and life on the road.

Although it appeared during a transitional period for the Kinks, Lola Versus Powerman was a success both critically and commercially for the group, charting in the Top 40 in America and helping restore them in the public eye, making it a “comeback” album. It contained two hit singles: ‘Lola’, which reached the #9 US, #2 UK and Germany – becoming the Kinks’ biggest success since ‘Sunny Afternoon’ in 1966 – and ‘Apeman’, which peaked at #5 in the UK and Germany. The track ‘Lola’, written by Ray Davies, allegedly details a romantic encounter between a young man and a possible trans-gender person whom he meets in a club in Soho, London.

As more and more of rock’s iconic albums begin hitting their half-century birthdays, one can begin to wonder if, perhaps, they all need comprehensive re-evaluations. This expansive reissue is the third such 50th anniversary release of the Kinks’ marvelous peak-period albums, and it definitely feels the most exhaustive. It also feels the most exhausting. The original Lola album was the brawniest and loosest of the three concept albums the Kinks released between 1968 and 1970, with its near-vaporous storyline about the music business feeling like something the band noticed after compiling an exceptionally strong selection of songs. It’s hard to figure out exactly how cuts like “Apeman,” “Lola,” “Strangers,” and “Rats” fit together because, well, they really don’t. However they still stand as some of the Kinks’ best songs: muscular, wry, and catchy despite their complexity. Nearly doubling the original album’s 13-song tracklist seems like a stretch, and that’s exactly what this doorstop of a release feels like. While previous anniversary editions were neatly organized—stereo album here, mono album there, all the single edits, some outtakes, BBC sessions, and maybe a live show to round things out—this collection is literally a “kitchen sink” affair (nine of the tracks on the even more expansive physical box set are Ray and Dave Davies supposedly discussing the album’s songs in Ray’s kitchen). The insights are minimal, but some of the additional material, like a sublime alternate version of “This Time Tomorrow” is exceptional. While one certainly understands the vault-clearing instinct at hand here, this edition could easily have risen to the level of its predecessors with a bit of judicious editing. But as it is, it’s maddening, peculiar, and particular, in a way that, perhaps, Kinks fans are quite accustomed to at this point. – Jason Ferguson