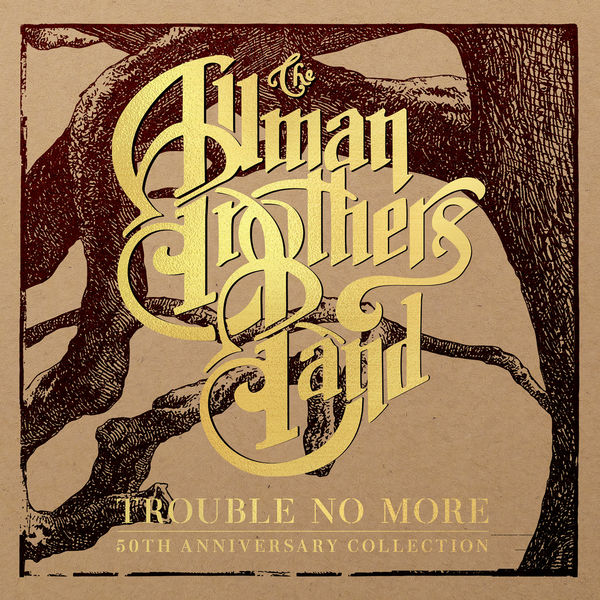 The Allman Brothers Band has announced the release of Trouble No More: 50th Anniversary Collection, a box set of rarities, unreleased tracks, live performances and classic songs. The box set, out February 28th via Island Mercury/UMe, celebrates the 50th anniversary of the rock band, and is available as a 10-LP or 5-CD box set or on digital.

The box set was produced by Allman Brothers Band historians and aficionados Bill Levenson, John Lynskey, and Kirk West, and collects 61 Allman Brothers Band classics, live performances and rarities, and includes seven previously unreleased tracks, including the original demo of “Trouble No More.” The songs have been remastered by Jason NeSmith at Chase Park Tranduction in Athens, Georgia, and the box set is arranged chronologically by era of the band.

Though it appears in the aftermath of their dissolution in 2014, and the deaths of both actual Allman brothers, Duane and Gregg, this 50th anniversary retrospective box set is arguably the only career overview of the band one can call representative. Arranged over ten LPs or five compact discs, Trouble No More examines in depth each incarnation and stage of the pioneering rockers. It convincingly formulates the argument that no other American band accomplished more musically (especially live) by seamlessly marrying rock, blues, jazz, and R&B to each other and to extended improvisation. This set compiles 61 Allman Brothers Band classics, live performances, and rarities — including seven previously unreleased tracks — all painstakingly remastered, with and a hefty 88-page book full of photos and a lengthy historical essay by ABB historian John Lynskey that recaps all 13 incarnations of the band’s lineup. Lynskey co-produced the set with fellow ABB authorities Bill Levenson and Kirk West. Sequenced chronologically, the music and its accompanying visuals offer a detailed, rounded portrait of this legendary band at their best in all incarnations. It forever puts to bed the argument that after Brothers and Sisters in 1972 they were done creatively until Warren Haynes signed up for their second re-formation in 1989. The set is bookended by versions of the Muddy Waters-penned title track. Disc one is an unreleased studio demo from 1969, while disc five’s electrifying closer is taken from the farewell shows at the Beacon Theater. The demo is interesting, mainly for the brief, raw interplay between guitarists Dickey Betts and Duane Allman. Some listeners may be surprised to find only the studio version of “Whipping Post” here, but given how many long jams are included, it’s a small omission; besides, “In Memory of Elizabeth Reed” from the same Fillmore East concerts is included. There is a previously unissued version of “Mountain Jam” from the Watkins Glenn Music Festival in 1973 that has never been issued before either. At just over 12 minutes, it’s nowhere near as long as the one from Eat a Peach, but it does offer the Chuck Leavell version of the band with Betts, Gregg, Jaimoe, Butch Trucks, and bassist Lamar Williams. at their best with three special guests: guitarists Robbie Robertson, Jerry Garcia, and Bob Weir! There are excellent choices from the albums Win Lose or Draw and Enlightened Rogues (otherwise spotty documents) that showcase Betts’ fine songwriting on “High Falls,” Crazy Love,” “Pegasus,” and “Can’t Take It with You,” co-composed with actor Don Johnson. The final disc houses most of the unreleased material, all of it cut live during the Peach Records years, between 2000-2014. The ten-minute read of Fenton Robinson’s “Loan Me a Dime” with Derek Trucks and Jimmy Herring on guitars is one of two tunes with this lineup, who offer up their own take on the tune that Duane played on for Boz Scaggs’ self-titled debut in 1969. Likewise a 1999 show, with Betts and Jack Pearson on guitars, delivers a read of the latter’s “I’m Not Crying” and features the composer’s impassioned vocals. While Trouble No More is almost certainly for hardcore fans only (given its cost and [beautifully] assembled excess), it is also the only Allman Brothers Band compilation ultimately worth owning for those same enthusiasts. – Thom Jurek