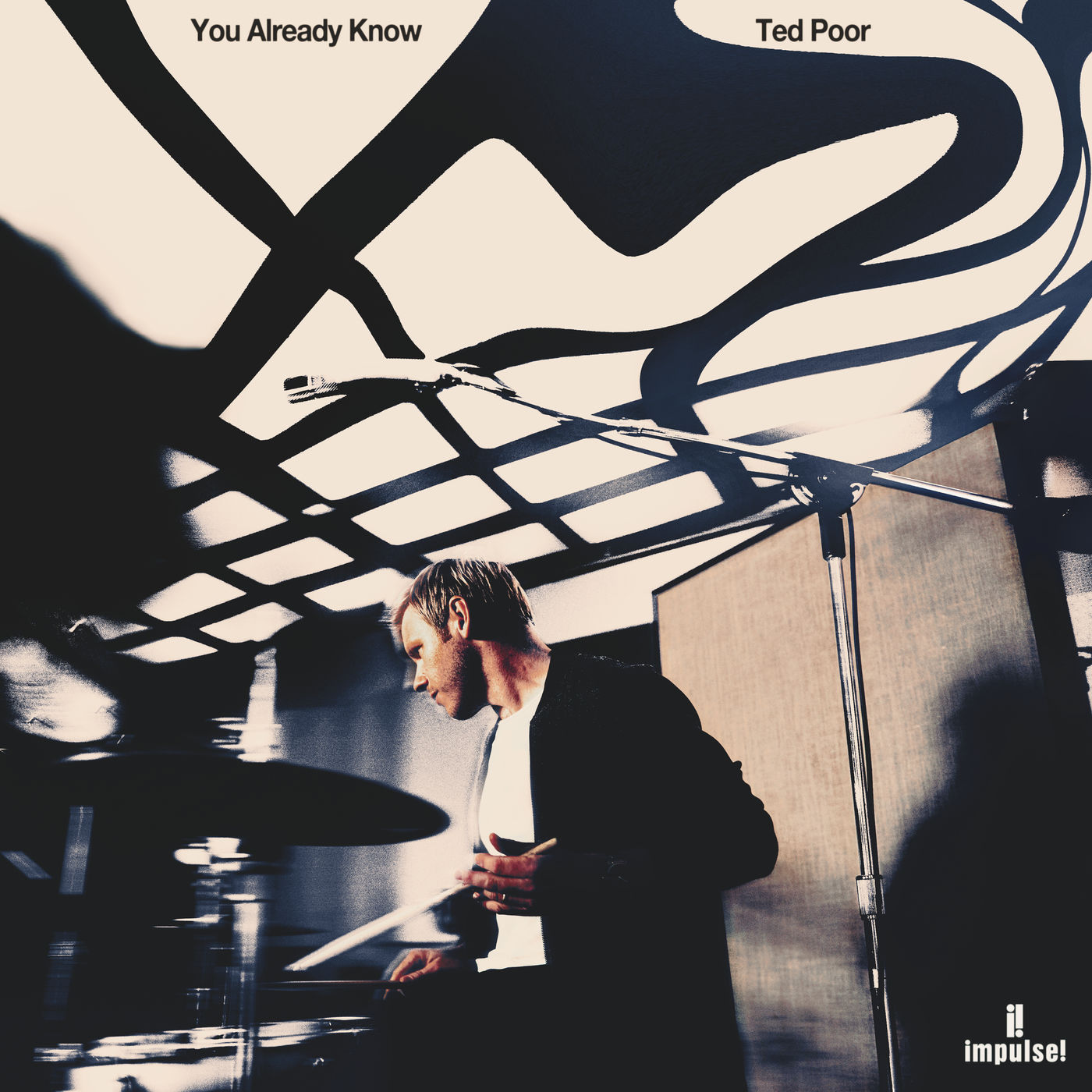 You Already Know, the New Deal/Impulse! debut from the acclaimed drummer Ted Poor—“a trustworthy engine in countless modern-jazz settings,” per the New York Times—isn’t your typical jazz drummer’s recording, almost defiantly so. But if you’re at all familiar with the Seattle-based Poor’s explorative career—or the wide-ranging work of his principal collaborators here, the deeply influential guitarist-producer Blake Mills and the saxophonist Andrew D’Angelo—this should come as no surprise.

After all, Poor has proven equally brilliant in bands led by the visionary avant-jazz trumpeter Cuong Vu and the lauded indie singer-songwriter Andrew Bird. Whether he’s on a club bandstand alongside a generation-defining improviser like the guitarist Ben Monder, or onstage at New York’s historic Town Hall, backing Paul Simon as part of Chris Thile’s trusted Live From Here band, Poor is a music-first drummer. His tremendous technical abilities behind the kit are inarguable—and no doubt serve him well as the Assistant Professor of Jazz Studies at the University of Washington in Seattle—but he places color, texture, sound and especially melody atop chops. “The songs that I write, and certainly the songs that appear on this record, are songs you can sing,” Poor says, explaining how his time in the employ of renowned singer-songwriters has informed his own composing. “These are the songs I sing to myself as well.”

For that reason, the minimalist You Already Know is a supremely listenable improviser’s album, with an artful crossover appeal. It’s easy to imagine it existing on the same inquisitive music fan’s record shelf alongside LPs by other Poor collaborators—say, the keyboardist-producer Mitchell Froom, or the singer-songwriter wunderkind Madison Cunningham, whose recent Verve Forecast release, Who Are You Now, features Poor.

Take Poor’s “Only You,” which boasts a loosely propulsive, almost trip-hoppy rhythm—“my beat,” as Poor calls it, chuckling—and long, true streams of melody from D’Angelo. (A critic’s favorite among current jazz alto saxophonists, D’Angelo is no doubt an Ornette Coleman disciple, and that influence is communicated beautifully and directly here.) “It is very repetitive; it’s very simple,” Poor says of “Only You.” “But there is a form and attention and emotion that grows out of that. And I love how all of the details—in the way that Andrew articulates his melody, and the intricacies of the drum part—have no choice but to be vaulted to the forefront of the sound.”

D’Angelo’s composition “New Wonder” is another highlight among the album’s nine tracks, touting a “drum melody in which the beat has a form itself,” Poor explains. Again, D’Angelo’s elegant delivery of an infectious melody is remarkably slippery; you don’t realize how meticulous his approach is because the sheer tunefulness of his playing strikes first. “Andrew is such a dynamic player,” says Poor, who met the saxophonist around 15 years ago, when both were stalwarts on New York’s avant-jazz scene. “His relationship to rhythm is so personal and special.”

“New Wonder” is also indicative of the stealthy sonic inventiveness that runs throughout You Already Know. During the album’s sessions at Los Angeles’ legendary Sound City Studios, Poor recorded D’Angelo’s melody on piano via the studio’s echo chamber but then removed the actual piano sound later on; the results resembled what Poor calls a “shimmery halo” of reverb and space. One of the project’s most affecting tracks, “To Rome,” homes in on Poor’s melodic ingenuity behind the kit (and piano), and features Andrew Bird on violin and Blake Mills on guitar. On “United,” a judiciously used overdubbed string section, courtesy of Rob Moose, fleshes out the duo ambience, and that newfound orchestral dimension pushes the album closer to chamber pop or contemporary classical than to any jazz-with-strings exercise. Throughout, inspired mixing by David Boucher (Andrew Bird, Randy Newman, Pixar) and mastering by Eric Boulanger (Neil Young, Rufus Wainwright, Green Day) grant the jazz-inspired project new angles in sound that come only with adventurous rock and pop studio experience.

An invaluable part of the album’s smart, streamlined design can be attributed to producer Mills, the 33-year-old polymath and an heir to super-producer-musicians like Ry Cooder and Don Was. In fact, the very existence of You Already Know belongs to Poor’s relationship with Mills. The two met and clicked in 2014, during the sessions for Bird’s album Are You Serious, and began hanging out and playing together whenever Poor would visit Los Angeles. During one of those hangs, Poor played some working recordings of his duets with D’Angelo, and Mills was thrilled by them. The inception of New Deal, Mills’ own imprint through Verve/Universal Music, set the wheels in motion. “I was really appreciative of how reserved Blake was in his choices as a producer,” Poor says. “There would often be times where I wanted to do more and more, or leave an element in longer, such as the strings or the piano. And Blake was very conscious of keeping the ear’s focus on the main two instruments, and to get in and out as quickly as possible with the other stuff.”

In some fashion, You Already Know is no different than the many gorgeous folk- and Americana-tinged singer-songwriter albums Mills has helmed. It’s a folk album, but “not the genre of folk,” Poor says. “It’s more the idea of music as oral tradition—music as song.”