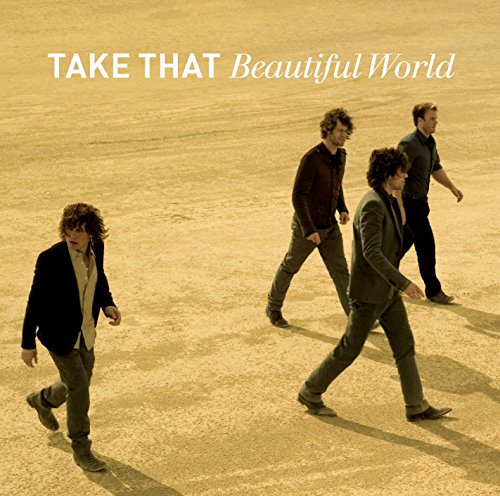 2006 ‘reunion’ album from one of the UK’s best selling boybands. Their first album in over 10 years, Beautiful World reunites four of the five original members including leader/songwriter Gary Barlow (the fifth member, international solo superstar Robbie Williams was invited but graciously declined). 11 tracks including the single ‘Patience’. Polydor.

It’s been a long ten years since Take That disbanded. Their recent reformation and world tour offered overwhelming evidence that, far from being forgotten, the post-Robbie quartet can still command hysterical amounts of goodwill and adoration. Beautiful World illustrates why this is so. Written in conjunction with songwriter/producer John Shanks (Ashlee Simpson, Anastacia, Alanis Morissette), the album is crammed full with the songwriting magic that made their rise to fame so meteoric in the first place. Far from being an exercise in nostalgia, the project moves the band in a slightly new direction. The four come across as more mature, more democratic (all members share songwriting credits on the album, rather than just Barlow), and even more adept at making epic pop that somehow avoids the cheese factor. Lead single “Patience” is a perfect example of how powerful and accessible their songs can be. It’d be a good contender for the album’s peak moment if the rest of the tracks weren’t so damn good too. With traditional Take That style songs (the immediately likeable “Reach Out”, the brimming “Like I Never Loved You At All”), nicely punctuated up by incongruous outings like Jason Orange’s folkish “Wooden Boat” and Mark’s upbeat, Beatles-esque “Shine”, Beautiful World sets a whole new standard for a band previously known more for their singles than their long-players.–Danny McKenna