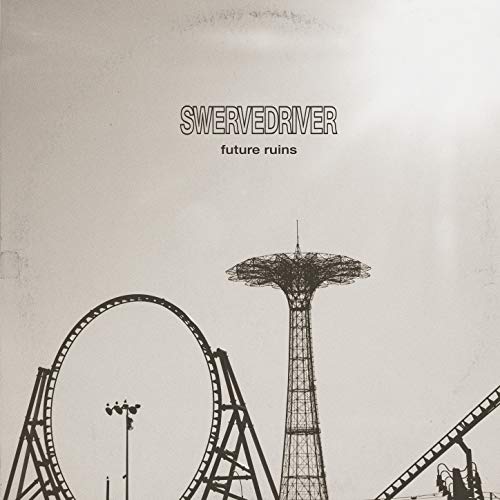 The sixth full-length release for the British alternative rock band is its first with the Dangerbird (and Rock Action in the UK) label.

Oxford guitar scientists Swervedriver weren’t always the first name to come up in a conversation about ’90s shoegaze, but they were responsible for some of the more inspired sounds to come out of the era, with an ear for the meeting of jangle and noise that bested even the most decorated shoegaze groups. After a lengthy hiatus, the band re-formed in 2008 and offered up the bright and beaming I Wasn’t Born to Lose You in 2015, their first new material in over 15 years. Sixth album Future Ruins continues the renewed and awakened character of its predecessor, but finds the band sounding more at home in their reunited state. Swervedriver’s early material was moody, vaporous guitar rock that felt like watching patches of heat lightning on a drive through the desert. That spirit is very much in tact here, if updated to reflect 30 years of experience and life lived. The grungy album opener “Mary Winter” stacks layers of contrasting guitar tones and drifts between keys in singer Adam Franklin’s signature approach to off-kilter melodies. Other up-tempo tracks like “Spiked Flower” and “The Lonely Crowd Fades in the Air” highlight Franklin’s gift for melancholy harmonies and unexpected songwriting turns. There’s an underlying theme of apocalypse running throughout Future Ruins, and it can be difficult to pinpoint if the dystopic collapse gestured at across many of the songs is societal or emotional. The dreamy pop of “Good Times Are So Hard to Follow” skips its gentle melody over lyrics about the end of a love affair before drowning the entire thing in a blanket of fuzz. The album tempers its moments of warm, familiar pop with experiments in dissonance that feel new to the Swervedriver sound. The mid-tempo title track comes on like a cavernous slowcore anthem, but soon introduces clanging processed notes that clash with more subdued tones. The push-pull instrumentation mirrors the song’s lyrics, which again paint a picture of dismal end times. “Everybody’s Going Somewhere and No-One’s Going Anywhere” plods along with jagged echo effects, haunted bells, and a distant spoken narrative hidden under the interlocking lines of electric piano and disruptive guitar outbursts. The ten tracks here are less optimistic than the last album, but also less temperamental than the band’s younger days. The songs feel removed from needing to fit into any overarching identity and take risks that wouldn’t happen if Swervedriver was trying to reinvent themselves or re-create a time long passed. Where I Wasn’t Born to Lose You was electric with the excitement of Swervedriver’s rebirth, Future Ruins is the sound of a band that’s happy to be back and ready to get down to the business of pushing their sound forward.