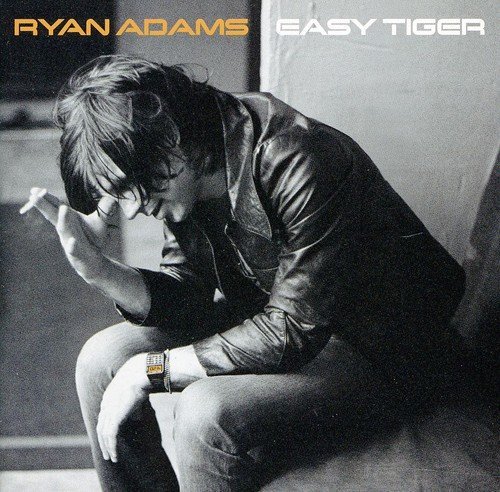 Easy Tiger has a “slow it down there, pal” undertone to its title — and who needs a word of caution other than Ryan Adams himself, who notoriously spread himself far and wide in the years following his 2000 breakthrough Heartbreaker. After celebrating his 30th birthday with a flurry of albums in one year, Adams decided to pull back, hunker down, and craft one solid album that deliberately plays to his strength. As such, Easy Tiger could easily be seen as the album that many of his fans have wanted to hear since Heartbreaker, a record that is tight and grounded in country-rock. Easy Tiger is focused, but so have been some of the other thematic albums Adams has delivered with such gusto — when he tried to run with the Strokes on Rock N Roll, mimicked the Smiths and Jeff Buckley on Love Is Hell, even turned out a full-on country album in Jacksonville City Nights, complete with knowing retro cover art, he stayed true to his concept — but the cumulative effect of the records was to make him seem scattered, even if the records could work on their own merits. With each album since the wannabe blockbuster of 2001’s Gold, his restlessness has seemed not diverse but reckless, so even his good albums seemed to contribute to the mess. Easy Tiger intends to break this perception by being concise, right down to how every one but one of these tight 13 songs clock in somewhere between the two-and-a-half and three-and-a-half minute mark. For somebody as doggedly conceptual as Adams, this is surely a deliberate move, one designed to shore up support among supporters (no matter if they’re fans or critics), which Easy Tiger very well might. Surely, it is a welcoming album in many ways, partially due to the relaxed Deadhead vibe Adams strikes up with his band the Cardinals, reminiscent of 2005’s fine Cold Roses. But if that CD sprawled, this one is succinct, as Adams flits through country-rockers and weepers — plus the occasional rock detour, like anthemic ’80s arena rocker “Halloween Head” or the spacy “The Sun Also Sets,” a dead ringer for Grant Lee Phillips — containing not an ounce of fat. Adams benefits from the brevity, most notably on the sweetly melancholy “Everybody Knows,” the straight-up country of “Tears of Gold,” or on “Two,” which mines new material out of the timeworn “two become one” conceit. Here, his songs don’t stick around longer than necessary, so they linger longer in memory, but the relentless onward march of Easy Tiger also gives the performances an efficiency bordering on disinterest, which is its Achilles’ heel. As fine as some of the songs are, as welcoming as the overall feel of the record is, it seems a bit like Adams is giving his fans (and label) “Ryan Adams by numbers,” hitting all the marks but without passion. This is when his craft learned from incessant writing kicks in — he can fashion these tunes into something sturdy and appealing — but it also highlights how he can turn out a tune as lazily as he relies on casual profanity to his detriment. Ultimately, these flaws are minor, since Easy Tiger delivers what it promises: the most Ryan Adamsy Ryan Adams record since his first. For some fans, it’s exactly what they’ve been waiting for, for others it’ll be entirely too tidy, but don’t worry — if Adams has proven to be anything it’s reliably messy, and he’s sure to get ragged again somewhere down the road (and based on his past record, safe money is on October 2007).