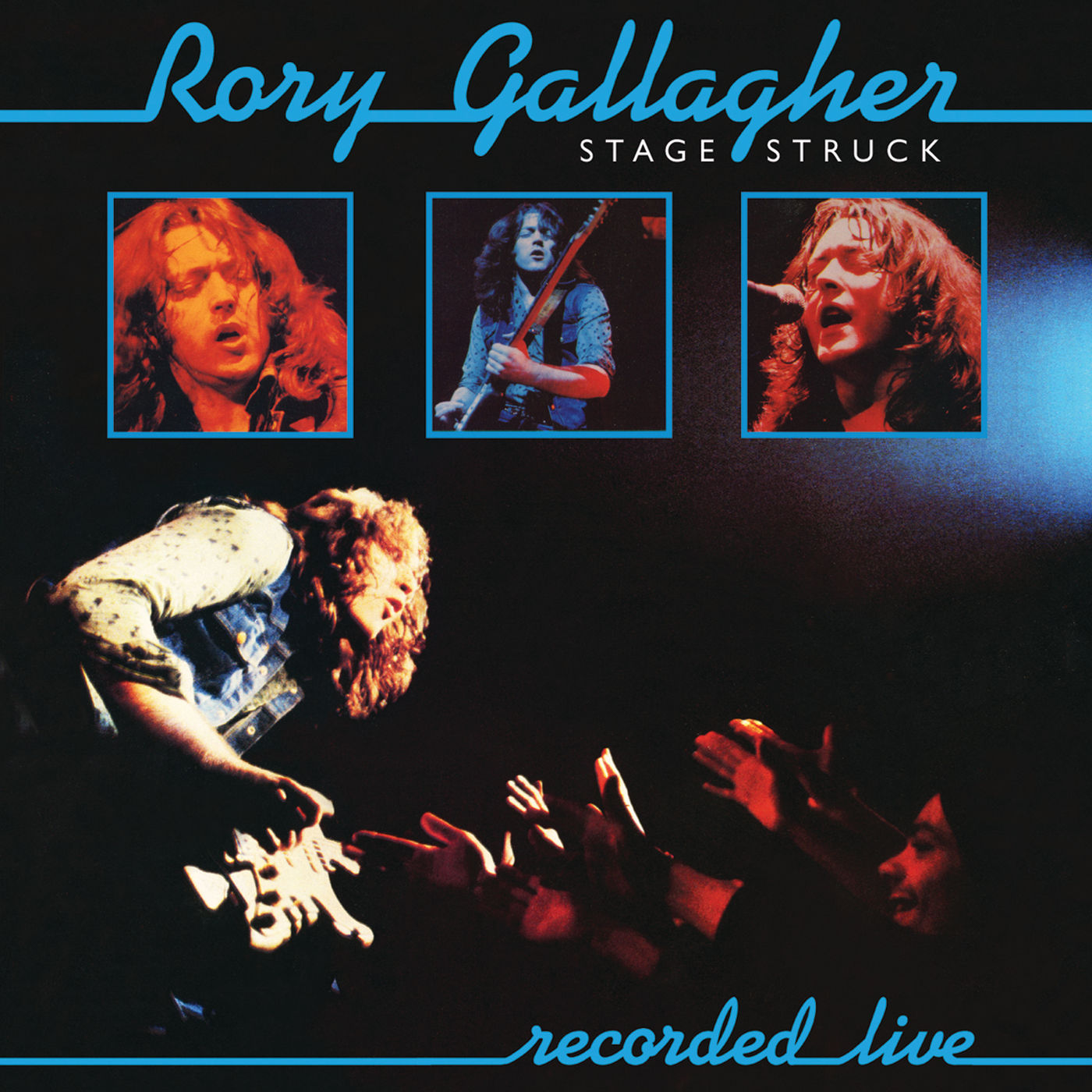 Stage Struck is the eleventh album and the third live album by Irish singer/guitarist Rory Gallagher. Recorded between November 1979–July 1980 and Released 2nd November 1980. The album documents Gallagher’s world tour in support of his 1979 album Top Priority. Accordingly, it features many songs from that album as well as hard-driving, almost metal, rock versions of songs from his ‘Calling Card’ and ‘Photo Finish albums, Glenn Tipton from Judas Priest “I was just stunned by his use of an old battered Stratocaster, a Vox AC-30 [amp], and a Rangemaster treble booster. The guitar had so much energy that I think he’s the guy, really, that made me pick up the guitar.”

“Guitarist Gallagher’s third officially released live album (during his lifetime) captures him on a grinding world tour in 1979 and 1980, pumping out blues-rockers with requisite aggression, yet none of the charm and subtlety that made his previous concert recordings so essential. The song selection is weak as it concentrates on lesser tracks from his late-’70s collections, but more problematically, the Irishman sounds like he’s rushing the tunes and generally playing too loud. The arrangements bludgeon the songs behind a Wall of Sound, as Rory spits, rather than sings the lyrics, shouting above the crashing fray. This is particularly true of “Bad Penny,” one of two newly added tracks for the revised 2000 edition, where Gallagher growls out the words as if they had little or no meaning, then shifts into a reggae beat that adds nothing to this version of one of his better tracks. While the live shows might have gone down well on-stage, when they’re transferred to album, the excitement is lost, and instead of Gallagher’s classy, snappy, eclectic mix of blues, folk, and rock, Stage Struck sounds like plodding, second-rate Bad Company or Foghat. Where both previous live discs added a few acoustic tunes as well as digging into deep blues to vary the sound and show Gallagher’s versatility, this one stays firmly rooted in straightforward sluggish rock, with precious little roll. All the songs push the five-minute mark, but none have the sizzle and compactness of Gallagher’s best work. He sounds like he’s going though the motions for the first time in his career, making this a below par, if not quite valueless document. The two additional tunes total about 11 minutes, but the disc is at least 20 minutes short of its potential playing time. Surely there must have been other tapes from this tour of better quality to tack on here. In any case, this is a disappointing reminder that even the best artists can release inferior work. For prime live Gallagher, stick with either 1972’s peppy Live in Europe, the blistering Irish Tour ’74, or the terrific posthumous release BBC Sessions.” (Hal Horowitz , AMG)