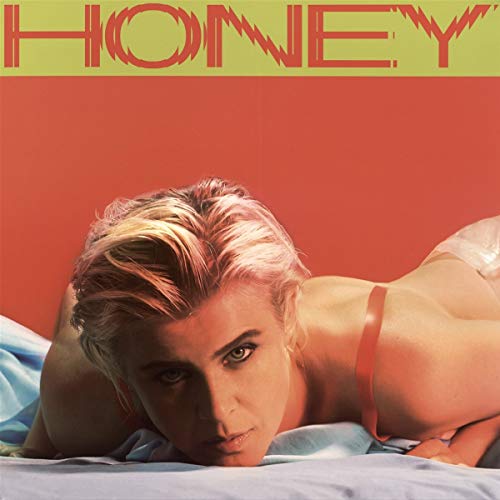 In much the same way she reinvented herself in the 2000s by forming her own label and crafting bright yet bittersweet electropop that provided the blueprint for generations of artists to come, Robyn’s return with Honey is more of a metamorphosis than a comeback. Following 2010’s triumphant Body Talk, she experienced seismic changes in her life: her longtime friend and collaborator, producer Christian Falk, died from pancreatic cancer in 2014, and she separated from her partner, photographer Max Vitali (the pair later reunited). Her grief and recovery were so profound that the precise structures and sharp hooks of Robyn and Body Talk couldn’t contain her emotions, so Robyn dissolves them on Honey, allowing her to engage on a more vulnerable level that spotlights her gift for making music that’s joyous and heartbroken at the same time. “Missing U” is both of these things, capturing both the sweetness of being together and the pain of being apart in its sparkling synths and irrepressible beat. It bridges her previous work and the rest of Honey’s flowing tracks, which draw on the things that gave her the strength to recover. Dancing has always been a major part of her music, and along with years of therapy, immersing herself in clubs helped her reconnect to herself. The album’s most kinetic tracks reflect her healing process: on the remarkable “Human Being,” she mingles her grief and need for intimacy with gentle synths and a rocking beat that cocoon her as she sings “baby, don’t give up on me now.” “Because It’s in the Music” borrows some slow-motion disco stardust as it strikes a tone somewhere between comfort and ecstacy, while “Between the Lines”‘ pulsing house adds playful, flirtatious energy. Here and throughout Honey, there’s a sensuality to Robyn’s music that feels new and welcome. She delivers her own style of sexual healing on the masterful title track, describing it as something nourishing beyond mere pleasure. “Baby Forgive Me” is both soft and daring; though she risks it all by asking to be taken back, she asks so sweetly that it’s almost impossible to say no. Perhaps as a tribute to her connection with Falk, Robyn made Honey with other close friends. Along with Klas hlund, her collaborator since the Robyn days, the album features lush, expressionistic tracks produced by Kindness’ Adam Bainbridge (“Send to Robin Immediately”) and Mr. Tophat (“Beach 2K20”). However, her main creative partner is Metronomy’s Joseph Mount, who contributed to over half the album and brings a crisp synth-pop edge to “Ever Again,” which finds a stronger, wiser Robyn promising herself to never be this devastated again. The eight years between Body Talk and this album would be a lifetime for almost any artist, and several lifetimes for a female pop star, whose career longevity isn’t usually measured in decades. However, Robyn continues to make the trends instead of following them, and with Honey, she enters her forties with some of her most emotionally satisfying and musically innovative music.