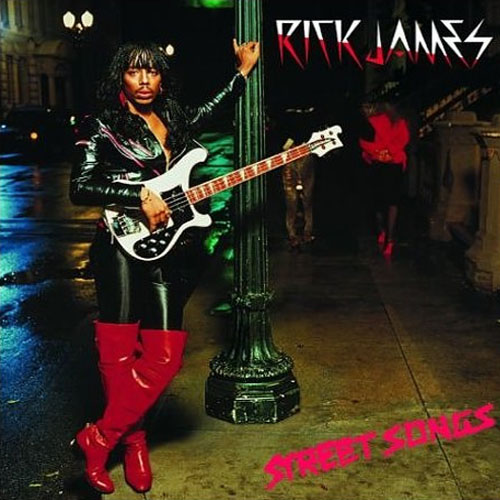 Rick James’ multi-platinum masterpiece propelled the musical icon to the forefront of the funk revolution. The commercially successful album found James at an artistic peak. With aggressive, yet smooth grooves the work encompasses all of James’ signature punk-funk flair. Included are two of his biggest and most celebrated hits, “Give It To Me Baby” and “Super Freak”. The album spent 20 consecutive weeks at the Top of the Billboard’s R&B charts and is the definitive recording by the charismatic performer.

Disappointed because Garden of Love wasn’t as well received as it should have been, Rick James made a triumphant return to defiant, in-your-face funk with the triple-platinum Street Songs. This was not only his best-selling album ever, it was also his best period, and certainly the most exciting album released in 1981. The gloves came all the way off this time, and James is as loud and proud as ever on such arresting hits as “Super Freak,” “Give It to Me Baby,” and “Ghetto Life.” Ballads aren’t a high priority, but those he does offer (including his stunning duet with Teena Marie, “Fire and Desire”) are first-rate. One song that’s questionable (to say the least) is the inflammatory “Mr. Policeman,” a commentary on police misconduct that condemns law enforcement in general instead of simply indicting those who abuse their authority. But then, the thing that makes this hot-headed diatribe extreme is what makes the album on the whole so arresting – honest, gut-level emotion. James simply follows what’s in his gut and lets it rip. Even the world’s most casual funksters shouldn’t be without this pearl of an album.