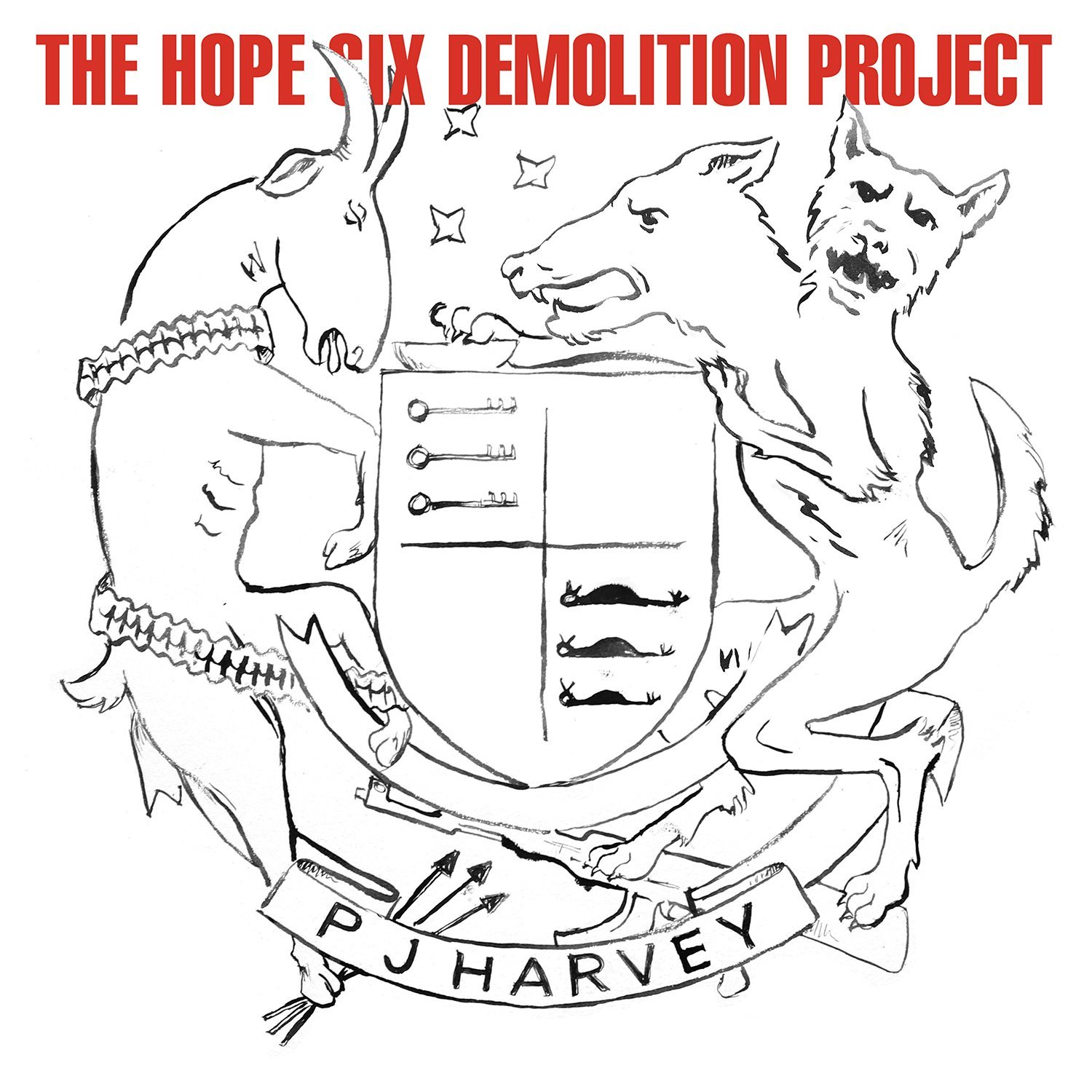 English rocker PJ Harvey’s 2016 release, infused with socio-political commentary and the controversial single “The Community of Hope”. The Hope Six Demolition Project draws from several journeys undertaken by Harvey, who spent time in Kosovo, Afghanistan and Washington, D.C. over a four-year period.

On 2011’s Mercury Prize-winning Let England Shake, PJ Harvey connected World War I bloodbaths with the 21st century world in harrowing, moving ways. Its follow-up, The Hope Six Demolition Project, feels like a companion piece with a wider focus and more urgent mood. For this project – which also includes the 2015 book of poetry The Hollow of the Hand and a film – Harvey and her Shake collaborator, war photographer Seamus Murphy, emphasized documentation: The pair spent years researching in Kosovo, Afghanistan and Washington, D.C.; later, Harvey was literally transparent about the recording process, making Hope Six at a recording studio behind one-way glass for public audiences at London’s Somerset House. Befitting its origins, the album’s sound is blunt and raw, mixing rock, blues, jazz, spirituals, and field recordings into the musical equivalent of photojournalism. Indeed, The Hope Six Demolition Project often resembles a collection of dispatches. “Near the Memorials to Vietnam and Lincoln”‘s title is as detached as a photograph’s cutline, while “The Ministry of Defence” offers a slide show of images from Afghanistan spanning “fizzy drink cans, magazines,” jawbones, and syringes. However, the best moments echo Let England Shake’s emotional impact and immediacy, which made listeners feel like they were in the trenches. Harvey delivers more feeling than reporting when she juxtaposes fading photographs of missing children with relentless brass and beats on “The Wheel” or lets her lyrics pile on top of each other with funereal inevitability on the weary “Chain of Keys.” Unfortunately, Harvey misses the mark almost as often as she hits it. “Medicinals”‘ portrayal of a Native American woman wearing a Redskins cap and drinking alcohol (“a new painkiller for the native people”) while surrounded by weeds her ancestors knew were healing plants, is more patronizing than poignant, while the way “River Anacostia” borrows “Wade in the Water” feels heavy-handed. Harvey is more nuanced when she comments on the limitations and complications of reporting and correcting injustices. Though it doesn’t address all the aspects of the effects of gentrification on Washington, DC’s 7th ward – a tall order for a two-and-a-half minute rock song – the ironic distance between “The Community of Hope”‘s rousing sound and its depiction of “shit-hole” schools conveys some of the situation’s complexity. An aid worker’s troubling uncertainty on “A Line in the Sand” (“We got things wrong/But I believe we did some good”) makes it one of The Hope Six Demolition Project’s most haunting moments, along with “Dollar Dollar,” a ghostly expression of Harvey’s anguish when her car pulls away before she can give money to a starving child. Tellingly, it’s the only song written from her own viewpoint, suggesting that her commitment to her role as observer on The Hope Six Demolition Project – as well-intended as it is – robs it of her best work’s potency. While it’s just one piece of a bigger work, on its own the album isn’t as satisfying as its predecessor.