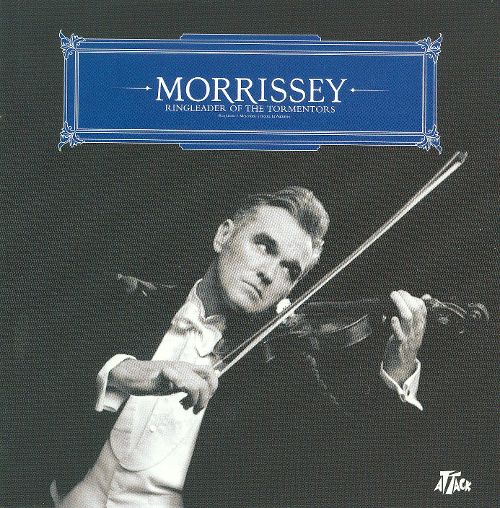 Few comebacks are ever as expertly executed as Morrissey’s 2004 return to the stage, You Are the Quarry. It may have not sold gangbusters but it was certainly a hit, proving that he still had legions of devoted fans who would follow through hell and high water (or at the very least, seven years between albums), and earned his best reviews in years, elevating him to the status of well-respected elder statesman. It also gave him the opportunity to return to regular record-making, an opportunity that he seizes with Quarry’s quickly delivered sequel, 2006’s Ringleader of the Tormentors. Despite its near-genius title, perfect artwork, and pedigree — instead of working with modern punk producer Jerry Finn as he did last time around, Moz has hired the legendary Tony Visconti, best known for his work with T. Rex and David Bowie, and even has the iconic Ennio Morricone provide orchestration for the epic “Dear God Please Help Me” — Ringleader of the Tormentors is about as close to standard-issue Morrissey as it gets. There’s always been a certain similarity to his work, particularly on his solo recordings, but each of his records either had a distinct sonic or aesthetic point of view or, at the very least, was graced by a handful of songs distinguished by a particularly sharp turn of phrase, whether it was lyrical or musical. It would seem that Ringleader has all the elements of being a cut above an average Morrissey LP, since not only are his collaborators storied themselves, but it’s supported by a press campaign where the once celibate, often miserable singer has declared that he’s abandoned L.A. for Rome, where he is living happily and living in love.

All of these elements seem to be the core ingredients for a classic Morrissey record, but there is little about Ringleader that’s distinctive: whether it’s the standard-issue single “You Have Killed Me” or the grinding seven-minute art rock centerpiece “Life Is a Pigsty,” each tune has an all-too-clear antecedent elsewhere in Moz’s catalog. Again, since Morrissey often works within a strict formula, this familiarity isn’t necessarily bad, but the songs lack memorable moments. Not to say that there aren’t highlights — the dirgeful opener, “I Will See You in Far Off Places,” is dreamily evocative, “In the Future When All Is Well” and “On the Streets I Ran” are nicely propulsive — but there is nothing noteworthy or fresh here besides Morrissey’s new tendency toward blunt words. He writes candidly about his personal life on this record in a way that he never has before — he implicitly outs himself on “Dear God Please Help Me” — and while this outburst of frank emotion may add some resonance to his declarations of love and rebirth, his words are clunky, lacking his trademark elegant wit (“I see the world, it makes me puke” and “there are explosive kegs between my legs” are a long way from “Why pamper life’s complexity/When the leather runs smooth on the passenger seat?”). That is also true of the very sound of Ringleader of the Tormentors, which is just a shade too slick and sequenced, veering too close to comfort to the overly glossy ’80s productions Morrissey routinely denounced during his days with the Smiths. These are subtle flaws, something that only the Morrissey diehard can dig out, but that’s pretty much the only kind of fan Morrissey has in 2006. And since these flaws are not enough to derail the record, just enough to annoy, it’s easy to enjoy Ringleader of the Tormentors as merely an everyday Morrissey record, but it’s hard not to shake the suspicion that this album is the closest he’s ever been to forgettable.