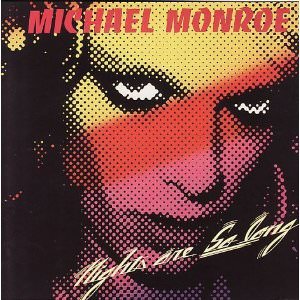 What a shock Nights Are So Long was when it came out in 1987. For the couple of years after Hanoi Rocks broke up (following the death of drummer Razzle) Monroe basically hung around New York City and guested with the likes of Johnny Thunders and the Dead Boys. Then, out of nowhere comes this album which is as pure a rock & roll record as you were likely to find back in ’87. In this case, Monroe had basically gathered some really hot musicians, including Joe Cocker guitarist Phil Grande and Ian Hunter on piano, along with grade A material, and came out with a real winner. The album kicks off with a rousing cover of the Heavy Metal Kids’ “She’s No Angel,” soon to become a signature tune for Monroe. Where as the Kids’ version is, well, lame, this is one of those covers that captures the essence of a song and blows away the original. “Million Miles Away” is up next, dusted off from the Stiv Bators solo album Disconnected. This song is a definite pop/rock classic with an amazing repeated chorus that allows Monroe to show off his vocal ability. Also covered with gusto and verve (simultaneously!) are MC5’s “High School” and the Flamin’ Groovies’ “Shake Some Action.” Both songs stay pretty true to the originals, but are tightened up a little bit to make room for Monroe’s impassioned barking. Former Dead Boy Jimmy Zero contributes two new songs here: the gorgeous ballad “It’s a Lie” and the title track. Zero had been very quiet during the ’80s and these songs show that he had not lost his knack for songwriting. Far more mature than his blazing anthems with the Dead Boys, these songs are gripping and catchy. Monroe sings every song like it matters. His range is particularly amazing on the ballads. The remaining originals are by Monroe. While his writing would get better on later albums (guitarist Andy McCoy wrote the Hanoi Rocks material) these tunes are pure, straight-up rock & roll. Very Slade and Chuck Berry. Mike Monroe achieved his goal of making a real rock record that he (a man of good taste) would want to listen to. This blows away Hanoi Rocks.