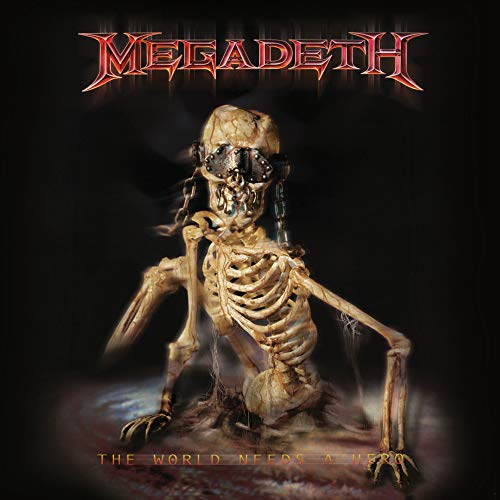 After leaving Capitol and losing longtime guitarist Marty Friedman, Megadeth felt that a retooling was in order. Risk had been the culmination of their move toward commercial accessibility, so much so that the album engendered a backlash among fans. So, they attempted to craft a more metallic record with The World Needs a Hero, going so far as to resurrect early-years mascot Vic Rattlehead for a gory cover that just screams heavy metal. And The World Needs a Hero does indeed prove to be the band’s heaviest offering in quite some time, certainly much more so than Risk. In fact, fans who just want to hear the group play straight-up metal will probably find this their best album since Rust in Peace or Countdown to Extinction — and Dave Mustaine tries to conjure memories of both. “Return to Hangar” is a sequel to Rust’s prog-thrash classic “Hangar 18”; the new lyrics are in the same meter, but recited over a much simpler riff (shades of Metallica’s “Unforgiven II,” anyone?). Album closer “When” nicks riffs from Metallica’s “Am I Evil?” cover; meanwhile, “Dread and the Fugitive Mind” (which first appeared on Capitol Punishment) has a growly recitation and stop-start riff straight out of “Sweating Bullets.” These tracks point up the album’s biggest problem: too much of the material feels like rehashed Megadeth Lite. Most cuts are taken at medium-to-slow tempos, and Mustaine’s production is still pretty radio-friendly, which means that the group never quite kicks up the fury or flash of past glories. As a result, the aggression Mustaine tries to whip up for his trademark lyrical melodramas often sounds forced, especially on the banal breakup drama “1000 Times Goodbye.” The World Needs a Hero is as professional as one would expect, but the album as a whole never quite catches fire, leaving it feeling too much like Megadeth-by-numbers; one can’t help but wonder if the group has many ideas left.