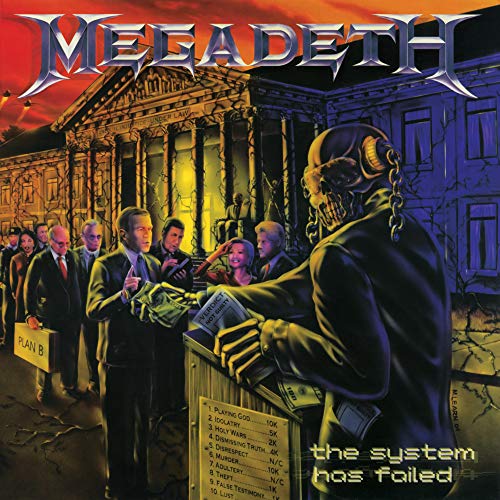 The System Has Failed marks a return from the dead for Megadeth — and quite a glorious return, it must be said. When bandleader Dave Mustaine was diagnosed in early 2002 with radial neuropathy — strained nerves in his left arm and hand — the snarling guitar shredder was forced to disband his once groundbreaking group after nearly two decades of activity. Granted, it wasn’t that big of a loss at the time, chiefly so because Megadeth had long passed its prime. The band’s key recordings date back to the speed metal era, from 1986 (the year of Peace Sells, Reign in Blood, and Master of Puppets) to 1992 (the year Megadeth, like Metallica a year earlier, made a distinct, more commercial shift, releasing Countdown to Extinction — to the dismay of many longtime fans). Following Countdown, Megadeth struggled. The band continued to release albums, but they weren’t well received and, very sadly, one of metal’s once preeminent acts became a bitter has-been. So after Mustaine’s injury, the disbanding of Megadeth didn’t seem all that unfortunate at the time — it seemed overdue, some would argue. Then in 2004, shortly after an exemplary reissue campaign, Mustaine resurrected Megadeth for The System Has Failed. And frankly, the band hasn’t sounded this vital since Countdown to Extinction, if not Rust in Peace (to risk overstating just how much of a return to glory this album is). Mustaine is joined on guitar by Chris Poland, the very talented guitarist whom he’d fired after the masterful Peace Sells album back in the day. It’s a surprise return, and no doubt a very exciting one for fans of Peace Sells (note the shred-fest “Kick the Chair” in particular). That re-pairing of Mustaine and Poland alone makes The System Has Failed worthwhile, but there are also the songs themselves. Put simply, they’re ferocious! No, this isn’t a good old-fashioned thrash album, but you can tell Mustaine is going for that vibe, especially on songs like “Back in the Day,” one in particular that should give dyed-in-the-wool headbangers a giddy sense of dj vu. The System Has Failed is actually more of a synthesis, taking the reckless abandon of pre-Countdown Megadeth and infusing it with the melodic songwriting of latter-day diamonds in the rough like “Symphony of Destruction” and “A Tout le Monde.” Add to this some especially thoughtful lyrics (archly political, nakedly personal, and shamelessly mature), and you have the recipe for an excellent, damn near perfect Megadeth album, up there with Peace Sells, Rust in Peace, and Countdown — as unlikely as that may seem. Regardless of where The System Has Failed ranks alongside Megadeth’s other standout albums, however, it most certainly blows away practically every other aboveground metal album of 2004. No joke. This is the sort of latter-day masterpiece Metallica struggled in vain for a decade-plus to record to no avail.