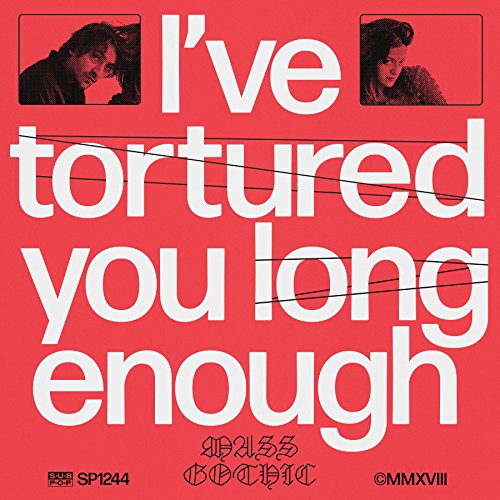 I’ve Tortured You Long Enough is the tongue-in-cheek title of Mass Gothic’s second album. Husband/wife duo Noel Heroux and Jessica Zambri have always dipped in and out of each other’s creative spaces, advising on their respective outputs and supporting one another. But, until this record, they had never completely committed to doing an entire album as a duo, sharing an equal load. The result is a record packed with the tension, chaos and beauty of a fluid and cathartic two-way conversation. In a universe that increasingly threatens our abilities to communicate and coexist, their creative union isn’t just inspired but important. When Heroux put out Mass Gothic’s 2016 debut, following the end of his prior band, Hooray for Earth, he did so as a solo entity. Plagued by insecurities and anxieties, Heroux wasn’t ready to deal with putting his trust and confidence into another shared project. So what changed? He can’t exactly pinpoint when the phrase “I’ve tortured you long enough” came to him, but it became a mantra, almost a premonition. He had tortured his own psyche long enough, and was particularly in need of forcing himself out of his comfort zone and letting go of that prior stubbornness. And the phrase has a broader application, too. “It covers so many bases but it’s taken on extra meaning in the past couple of years when everybody is at each other’s throats, frustrated and confused all the time,” Heroux explains. Heroux and Zambri wrote I’ve Tortured You Long Enough while bouncing around the country without a place to call home. From working in a rented cabin in upstate New York, to living out of a car with a duffel bag of clothes, to crashing with their co-producer Josh Ascalon in LA, to ditching a mixed version of the album and rerecording the whole thing, the band worked tirelessly while their lives were totally in flux. “Maybe we wouldn’t have been able to do it if we were anchored at home. We were forced into it. Jess was trying to open me up and if we could have just sat on a couch and thrown on the TV it probably wouldn’t have worked.” The album was ultimately recorded in Brooklyn with Rick Kwan, and Chris Coady mixed the record and Heba Kadry mastered it. The final product recalls the frantic energy of Animal Collective and the celestial torch-bearing of Bat for Lashes, and reveals a remarkable arc. It begins from a place of uncertainty, disquiet, and self-doubt, and concludes with the comfort in knowing that you can be both independent and successful in a relationship.