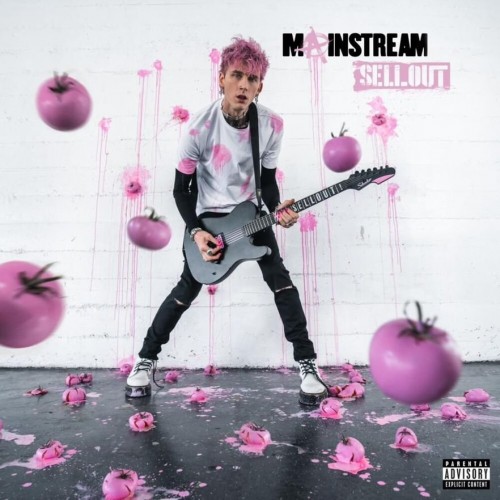 Mainstream Sellout is the sixth studio album by American rock musician Machine Gun Kelly, released on March 25, 2022, via Bad Boy Records and Interscope Records. It is his second collaborative project with drummer and producer Travis Barker, following 2020’s Tickets to My Downfall. In August 2021, the album was announced under its original title, Born with Horns, by which it was known until being renamed in January 2022.

The album was first announced on August 9, 2021, on Instagram, where Kelly and collaborator Travis Barker revealed matching tattoos of the phrase “born with horns”, the album’s previous title. Kelly announced that he and Barker were “back for round two”, a reference to his fifth album Tickets to My Downfall, his first collaboration with Barker. Barker will return to produce Mainstream Sellout.

The album’s lead single, “Papercuts”, was released on August 11, 2021. The accompanying music video was directed by Cole Bennett. A 20-second teaser of a song was teased on Instagram prior to the album announcement: the post was captioned “Signed a deal; I got papercuts”, which matched the lyrics in the clip. Previews teased that he had shaved his head for the music video, though it was later revealed to be a bald cap. The song has led journalists to believe he was continuing in the pop punk direction of Tickets to My Downfall. The song addresses Kelly’s struggles with his own fame.

In October 2021, Kelly described the album as “darker” and more “guitar-heavy” than Tickets to My Downfall. He also hinted at a New Year’s Day release date. On January 31, 2022, Kelly announced that the album had been retitled to Mainstream Sellout. On February 4, 2022, Kelly announced the release date of the album and released the second single “Emo Girl” featuring Willow. On March 4, 2022, Kelly released the third single “Ay!” featuring Lil Wayne. On March 14, 2022, Kelly revealed the album cover and the tracklist using a series of Dolce & Gabbana designed clothing items that featured the song titles. The album cover attracted comparisons to that of Japanese Breakfast’s 2021 album Jubilee, though Michelle Zauner denied the similarities, feeling the comparisons were manufactured to try to create controversy. On March 16, 2022, after having performed “Maybe” during Emo Nite in Los Angeles, Kelly released the track as the fourth single of the album. The song features the lead vocalist, Oliver Sykes, of British rock band Bring Me the Horizon. The album is scheduled for release on March 25, 2022.