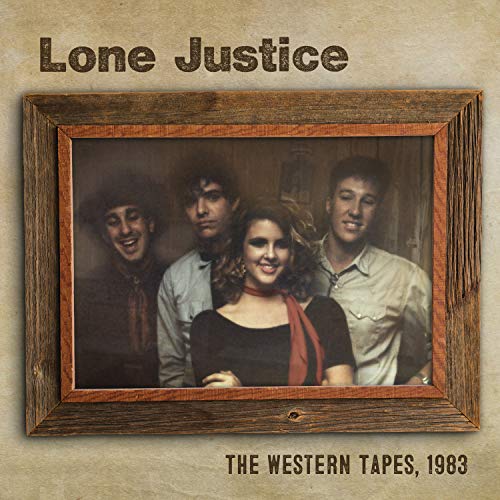 With the passage of time, it’s becoming increasingly clear that Lone Justice were a great band who did their finest work in the recording studio quite some time before they put out their debut album. While the two LPs Lone Justice released in their lifetime — 1985’s Lone Justice and 1986’s Shelter — were both burdened with misguided production choices and too many guest musicians at the behest of their label, Geffen Records, the 2014 release This Is Lone Justice: The Vaught Tapes, 1983 captured them live to two-track in a no-frills demo session. The Vaught Tapes documented the interplay between Maria McKee’s stellar voice and the band’s twangy but powerful take on rock & roll with a energetic simplicity their albums did not, and four years later, Omnivore Recordings have brought out The Western Tapes, 1983, a six-song EP that gives Lone Justice’s first demo tape a public airing for the first time. Cut in May 1983, this EP features the group’s first lineup, with McKee and guitarist/songwriter Ryan Hedgecock joined by bassist Dave Harrington and drummer Don Willens, and if this rhythm section boasts a bit less snap than the classic lineup with Marvin Etzioni (who produced this session) and Don Heffington, this band still has an energy and freshness that are absolutely winning. Etzioni was also a more savvy producer than Lone Justice usually had behind the controls; the sound is straightforward but full-bodied, he brought out solid performances from everyone on board, and the decision to bring in David Mansfield to add fiddle and pedal steel on some of the tunes was inspired. And Maria McKee’s voice is still a thing of wonder all these years later, a pure country instrument that still has the force to sing thoroughly convincing rock & roll. One can’t help wish some smart indie label had cut a low-budget album on this band in the manner of the Blasters’ outstanding self-titled album for Slash that would have documented their heyday before Geffen got ahold of them. But between The Western Tapes and This Is Lone Justice, we now have some reasonable approximation of it, and this is great fun from a band that had a lot to offer — more than their best-known work might suggest.