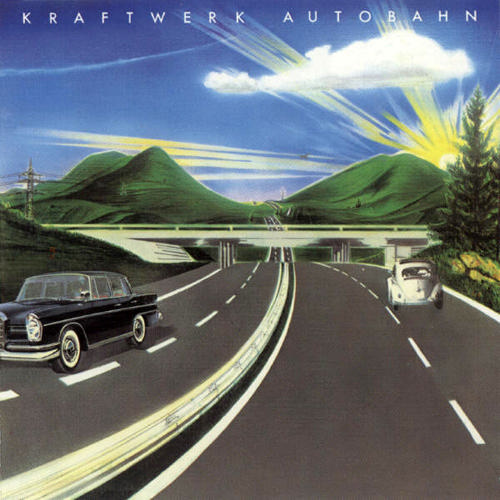 Autobahn (German for “motorway”) is an album by Kraftwerk, released in 1974. The album’s 22-minute title track was edited to about 3 minutes for single release and reached #25 on the US Billboard charts, charting even higher around Europe, including #11 in the UK. This commercial success came after the band had released three highly experimental and purely instrumental albums.
Autobahn is not a completely electronic album, as violin, flute, and guitar are used along with synthesizers. The title track features both untreated and vocoded vocals; the remaining tracks are purely instrumental. Kraftwerk used a Minimoog, an ARP Odyssey, an EMS Synthi AKS and various devices of their own design and implementation, such as their famous electronic drums.
The title track is intended to capture the feeling of driving on the Autobahn: from the high-speed concentration on the fast lane, to tuning the car radio, to the monotony of a long trip. Autobahn is also the first of Kraftwerk’s concept albums of sorts, which they have done up to 2003.
The front cover of the original German edition was painted by Emil Schult, a long-time collaborator of Ralf and Florian, who also co-wrote the lyrics to the song “Autobahn”. The version released in the UK on the Vertigo label in 1974 had a differently designed cover, produced by the label’s in-house marketing department.
Klaus Röder was not a member of the band for very long, and had left before the recording sessions were completed. Wolfgang Flür’s face was added to the group photo on the back cover of the original LP (grafted onto Emil Schult’s body) at the last minute when it was decided that he would stay as a permanent member of the band.
Konrad Plank had reputedly played a large role in developing the Kraftwerk sound, and much of the recording and all of the mixing of the work took place at his studio in Cologne. Plank’s contribution to the sound was evident in comparing the album version of “Kometenmelodie” with the rare demo-quality single “Kohoutek-Kometenmelodie”, recorded without his input.
Flür had played with the band since late in 1973, first appearing with them on a Berlin TV performance to promote their Ralf und Florian album. On that show, he debuted the band’s custom-built electronic percussion pads, and these feature heavily on the Autobahn album.
Although Philips Records and Vertigo Records were the original labels that released the album, it has been reissued multiple times in various regions by Mercury Records, EMI Records, Parlophone Records, Warner Bros. Records and Elektra Records. There are also several variations in the artwork of these reissues. Currently, the EMI Compact Disc edition is the one which remains in print; it is only available as an import in North America.

Although Kraftwerk’s first three albums were groundbreaking in their own right, Autobahn is where the group’s hypnotic electronic pulse genuinely came into its own. The main difference between Autobahn and its predecessors is how it develops an insistent, propulsive pulse that makes the repeated rhythms and riffs of the shimmering electronic keyboards and trance-like guitars all the more hypnotizing. The 22-minute title track, in a severely edited form, became an international hit single and remains the peak of the band’s achievements — it encapsulates the band and why they are important within one track — but the rest of the album provides soundscapes equally as intriguing. Within Autobahn, the roots of electro-funk, ambient, and synth pop are all evident — it’s a pioneering album, even if its electronic trances might not capture the attention of all listeners.