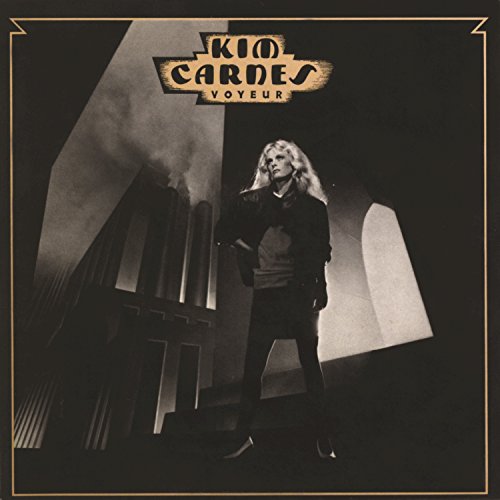 The problem with success is following it, of course, and Kim Carnes had a very difficult time doing that after “Bette Davis Eyes” and its accompanying album, Mistaken Identity, rocketed to number one overnight in 1981. Voyeur, her follow-up, appeared that following September, and it was expected to be a blockbuster, not just by her label, EMI, but from many industry observers as well. How could it not? She had a huge hit underneath her belt and the new album followed the pattern of the hit — sleek, stylish post-new wave pop/rock, heavy on drum machines, sequenced synths, and arena rock guitars, all married to anthemic pop tunes and ballads. It seemed tailor-made for hit status, but it stalled on the charts. This was a shocking performance for an artist that seemed poised for superstar status, and it’s hard to say exactly why the record didn’t do as well. Yes, Voyeur doesn’t have anything as brilliant as “Bette Davis Eyes” on it, nor is it as even as Mistaken Identity, but it truly does follow the formula effectively, and there are moments, like “Merc Man,” that seem ready for the radio. But it was not to be, probably because of the shifting tastes of the American public. The album itself got lost in the emergence of MTV and the accompanying surge of popularity of new wave. And so, the album didn’t burn up the charts, but as a piece of music, it was certainly a worthy follow-up to Mistaken Identity.