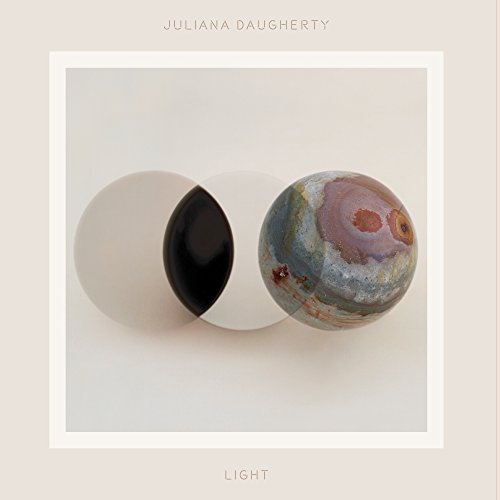 It’s hard to imagine that the softness and subtlety of singer-songwriter Juliana Daugherty could materialize amid the tumult of current-day Charlottesville, VA, but every mode of being continues there, as it does elsewhere, despite the impressions headlines might give. Political outrage seems to inhabit every mental space in modernity implying that the most important problems are the most visible. Societal ills being what they are, private struggles still exist, and Daugherty’s debut Light gives them palatable, manageable, and satisfying form.

“I wrote this record partly to strip mental illness of its power,” Daugherty says. She adds, “There is nothing useful or beautiful to be gleaned from the experience of depression.” Though this statement seems contrary to the romantic tone of Light, it is refreshing to hear an artist speak of their own depression with objectivity, unwilling to be charmed by the gloom. Daugherty wields her songcraft like a sword, not a diary to be buried in a drawer.

Album opener “Player” rides in on this sentiment, with a softly charging, motorik pulse that urges Daugherty’s croon into the center, like a reluctant actor being pushed onto the stage and into the spotlight by an unseen hand. Even so, her lilting voice asserts itself despite its understatement, having long since gained a quiet confidence that transcends the need for egotistical decoration. It is in this way that her tenure in the Virginia folk scene with acts Nettles and Hill & Wood– not to mention her classical training– shine through most.

Initially walking in the footsteps of her trumpeter and violist father and mother, Daugherty grew up playing multiple instruments, even attending a conservatory before stepping away from classical music entirely. She went on to acquire an MFA in poetry– a fact not lost on Light. In many ways, poetry seems to be another musical instrument on the record, deepening the mood instead of merely floating atop it. This is most apparent on twin-centerpieces “Sweetheart” and “Bliss” which form the aching peak of the album. The former song weaves words of gentle, mid-winter yearning around a pillar of melodies that have a slight old-world hue, recalling some of the more tangible moments of J. Tillman (who once found a home on the same label).

From here, a deepening of atmosphere doesn’t appear possible and yet “Bliss” attains just such effect. Hushed verses whisper over vaporous strumming, lowering our guard for a heartbreaking chorus of only five words: “don’t say anything at all.” However bleak it may have appeared upon entry, we are now quite at home in the grey-green world that Daugherty has built, remembering with fondness the dim chapters of our own life stories.

As the path of Light winds further, another clear landmark appears in the form of the asymmetrically rhythmic title-track. Pattering percussion bends the convention set by the rest of the album, while Daugherty’s voice approaches the tortured coo of Beth Gibbons– in fact the overall result of the song is altogether Portishead-like in the best way possible.
On “California” Daugherty gently pleads with a fading lover “can we keep the line open for a while?” as the Light itself winds to a close. The final track “Wave” lowers us out of the cloudbank and back to the ground with its bareness, dropping us off at our door, and quietly acknowledging the intimate journey we’ve been privy to. Only then does it become clear that Light was not a title chosen despite the gravity of its subject matter– romantic struggle, abject depression, and throbbing vulnerability– but rather in service of it. Light, so to speak, comes when we give shape to what haunts us.