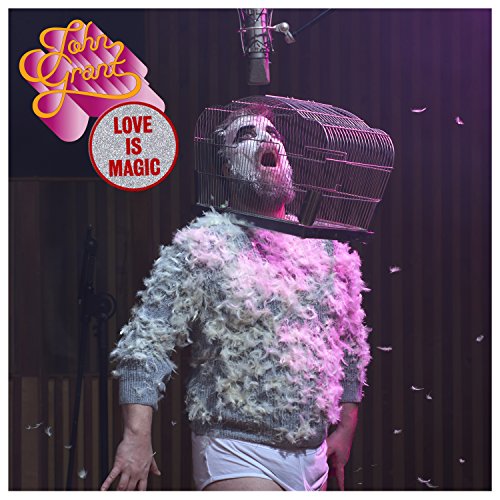 On Love Is Magic, John Grant lets the electronics that have lurked around the edges of his music since 2013’s Pale Green Ghosts finally take center stage. To make his fourth solo album, he recruited Ben “Benge” Edwards, with whom he worked on Mr. Dynamite, the debut from his dark electro-pop side project Creep Show. Though this transformation was a long time coming, it’s still remarkable just how liberating it is for Grant’s music: He switches even more nimbly from cutting wit to heartache to romance, both ironic and genuine, on Love Is Magic’s snarky funk-pop and sentimental ballads. On “Metamorphosis,” synths blare as Grant recites grim and absurd non sequiturs in his booming baritone, then swirl in an echo of the free-floating anxiety about his sobriety and the 1995 death of his mother that swallows the the song like a sinkhole. Throughout the album, Edwards’ electronics act like a hall of mirrors, reflecting and refracting Grant’s fondness for nostalgia (and his even greater fondness for subverting it). The album’s luminous sounds underscore the disconnect in Grant’s words — on the title track, he sings “And this thing called intimacy/Isn’t what you always thought it would be” over synths that glitter like stardust — or decay into something more complicated than just yearning for the past. On “Tempest,” childhood memories of Grant’s arcade favorite and “the wastelands of the American mall” combine in glowing harmonies and synthetic explosions sampled from the video game.

Elsewhere, Grant skillfully layers and skewers the self-obsession of the ’80s and the 2010s in surreal and hilarious character sketches of toxic masculinity. The over-sexed, over-confident “He’s Got His Mother’s Hips” sharpens the funk moves and insults of Grey Tickles, Black Pressure; “Preppy Boy” is a tangle of self-loathing and sexual attraction inspired by an Izod-clad archetype with highlights in his hair (“from the sun, of course”); “Diet Gum,” about a master manipulator able to keep his victims under his sway even after they deliver scathing insults like “a patheticness of fuckwits,” is a robotic, hypnotic standout. These venomous satires clear the way for Love Is Magic’s final third, which dares to unironically live up to its title. One of Grant’s most beautiful and genuine love songs,”Is He Strange?” boasts a melody that would do Karen Carpenter proud, and more emotional complexity than the album’s caustic moments. “Touch and Go,” a soft rock ballad inspired by Chelsea Manning, the American transgender former soldier convicted of being a spy, closes Love Is Magic with the thought “You can’t stop the process of the truth, try as you might.” It’s a hopeful, if not exactly happy, ending to an album that feels more like an experience than a collection of songs and finds Grant at his loosest, funniest, and most heartbreaking.