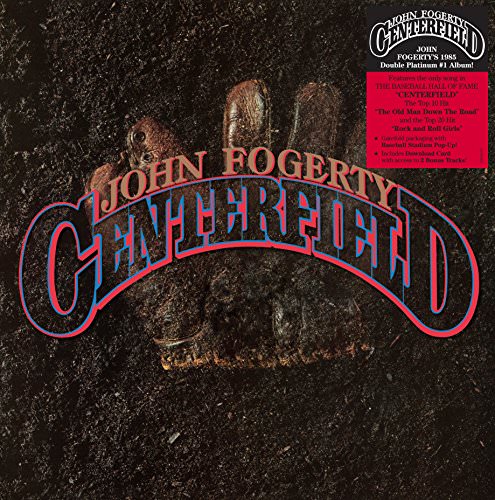 John Fogerty pulled himself out of the game sometime after his 1976 album Hoodoo failed to materialize and he sat on the bench for a full decade, returning in the thick of the Reagan era with Centerfield in 1985. For as knowingly nostalgic as Centerfield is, deliberately mining from Fogerty’s childhood memories and consciously referencing his older tunes, the album is steeped in the mid-’80s, propelled too often by electronic drums — the title track has a particularly egregious use of synthesized handclaps — occasionally colored by synths and always relying on the wide-open production that characterized the ’80s…plus, there’s no denying that this is the work of a middle-aged baby boomer, romanticizing TV, rockabilly, baseball, and rock & roll girls. Since Fogerty always romanticized a past he never lived, these sepia tones suit him but it also helps that he’s written a clutch of terrific songs: that giddy ode to his beloved game, the equally sunny rocker “Rock and Roll Girls,” the snappy Sun tribute “Big Train from Memphis,” the gently swaying “I Saw It on TV,” the rip-roaring “I Can’t Help Myself” (only slightly undone by its hyper-active drum programming) and, of course, “The Old Man Down the Road,” a callback to CCR’s spooky swamp rock so successful that Saul Zaentz, the then-president of Fogerty’s former label Fantasy, sued John for plagiarizing himself. Of course, Zaentz’s ire was likely piqued by Fogerty baiting the record label president on no less than two songs on this slim, nine-track LP: Fogerty howls against “Mr. Greed” and taunts that “Zanz Kant Danz but he’ll steal your money,” a potshot so direct he had to retitle it “Vanz Kant Danz” on subsequent pressings. Perhaps Fogerty’s anger is justified — he had to give up his rights to CCR songs as a condition of leaving Fantasy — but it’s not articulated well in song, adding a slight unwelcome sourness to an album that’s otherwise a cheerful, glorious comeback.