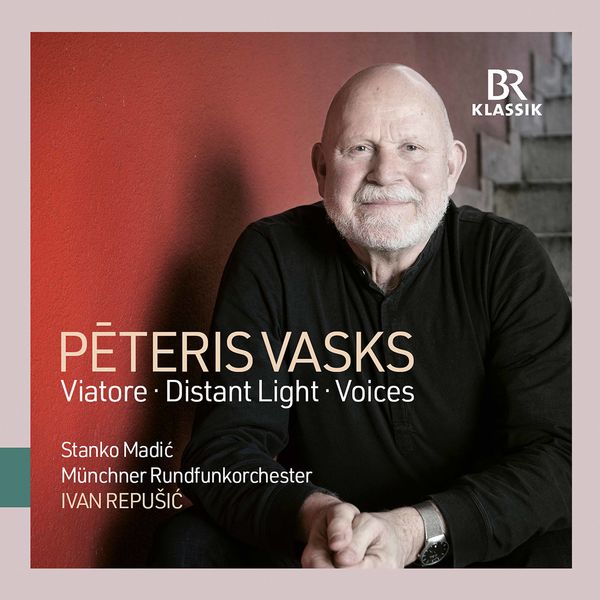 “The works on this album are for chamber-music string ensembles: his first symphony “”Balsis – Voices”” (1991), the haunting violin concerto “”Tālā gaisma – Distant Light”” (1996/97), and the piece “”Viatore” (the traveller; 2001), dedicated to Arvo Pärt, here in a version for eleven solo strings by the conductor, church musician and arranger Stefan Vanselow. The Münchner Rundfunkorchester plays under its chief conductor Ivan Repušić, and the concerto soloist is Stanko Madić, first concertmaster of the MRO. During the critical phase that accompanied the emancipation of the Baltic states from the Soviet Union, Vasks’ symphony “”Balsis”” was commissioned by the Ostrobothnian Chamber Orchestra, and it premiered on September 8, 1991 in Kokkola, Finland. Its three sections are dedicated to the voices of silence, the voices of life and the voice of conscience. – The Concerto for Violin and String Orchestra “”Tala gaisma””, commissioned by the Salzburg Festival, is dedicated to Gidon Kremer, who premiered it with the Kremerata Baltica on August 10, 1997 in Salzburg. It is a sound epic rich in contrasts, with three great virtuoso solo cadenzas, tonal carpets of chords, elements of folklore, and full of dramatic gestures. – Viatore, the tribute to Arvo Pärt that Vasks composed in 2001, describes man in the loneliness of his existence as a restless wanderer – from his arrival in this world to his adolescence, his first love, and his eventual disappearance.”

Latvian composer Pēteris Vasks is becoming more and more popular with the new generation of musicians. His music is often gripping, soaring, meditative and luminous. His Violin Concerto “Distant Light” has now entered many violinists’ repertoires – Renaud Capuçon, for example, recorded it for Erato and his magnificent Viola Concerto was recorded for BIS by Maxim Rysanov, who also completed his recording with the masterpiece Symphony No. 1 “Voices”.

It is undoubtedly the most “barren” work in this new release. Premiered in Finland in September 1991, it totally corresponds to the Ostrobothnian Chamber Orchestra’s sound (one of the most famous chamber orchestras in Sibelius’ country), conducted at that time by Juha Kangas. The work uses lots of tremolos and sustained notes which bring Sibelius to mind. Though time has passed and the work that Vasks portrays here is also reminiscent of some of Rautavaara’s figurative elements with its poetic imitations of sounds of nature and bird songs in the second movement, Voices of Life. It also depicts with surprising detail the hardships of living under Soviet rule. The Munich Radio Orchestra, conducted by the talented Ivan Repušić (go listen to Gotovac’s opera Ero, recorded by CPO) reveal a very intense and unforgettably accurate performance. It’s not to be missed.

Viatoire, played here in an arrangement for eleven strings, is just as brilliant. Distant Light is brought to life with rare finesse by the violinist Stanko Madić and the Croatian conductor. An ideal gateway into the music of the greatest Latvian composer of our time. – Pierre-Yves Lascar