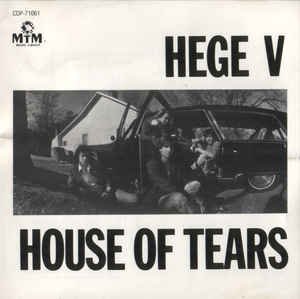 HEGE V (pronounced: Hegg ee / Vee) the man & the Band pioneered ‘Alt.Country / Americana music’, introducing this yet un-named genre to Album Rock, College and Country Radio in 1987/88.They were the FIRST ‘Alt.Country’ artists to blaze the trail out of the Southeastern U.S. of A., later followed by the Backsliders, Whiskeytown and others.

Hege’s “rural rock” took-off with the release of HOUSE OF TEARS, produced by Mitch Easter (of REM fame) at his legendary Drive-In Studio in Winston-Salem, NC. The band toured America in a beat-up ’65 Cadillac hearse, the “Hearse Of Tears”, (10,000 miles through 21 states in 27 days) playing the honky-tonks from Austin to Boston while Hege’s self-directed music video, “Burial Ground Of The Broken Hearted”, aired on MTV.

HOUSE OF TEARS wound-up alongside U-2, Bruce Springsteen and REM on many ‘BEST OF 1987′ lists, including THE BOSTON GLOBE’s where Hege V was declared “A FUTURE SOUTHERN SUPERSTAR”!

FAQ: What Happened To Hege?… He tried to go by his “Middle Name & Roamin’ Number” (his full name: George HEGE Hamilton V, get it?) but they just wouldn’t let him. People still have a hard time pronouncing “HEG-EE VEE”…and most articles & reviews referred to Hege as George Hege Hamilton V…

So in 1988, Hege went by his first & last name along with his number, releasing his first Country single, “She Says”, as George Hamilton V. The Country single, taken from the HOUSE OF TEARS Alternative Rock CD, featured an added guest appearance by the New Grass Revival’s Sam Bush on fiddle & mandolin and made it into BILLBOARD Magazine’s TOP 100 earning invitations to perform the song on BBC-TV and at the world-famous GRAND OLE OPRY®.