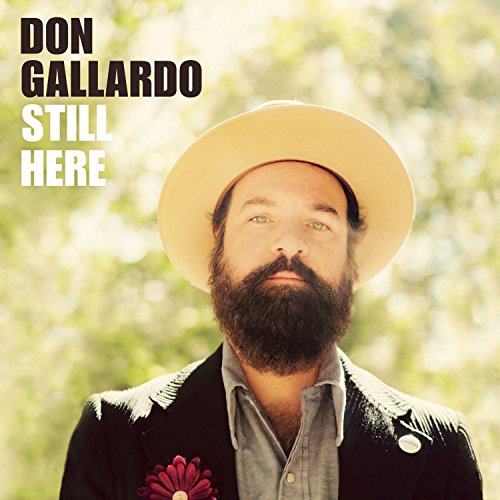 From the foot of Mount Tamalpais, just north of San Francisco and east of the Pacific shore, to East Nashville’s stubbornly independent community of young artists and musicians, singer/songwriter Don Gallardo’s path has always steered clear of the mainstream. Traces of his journey illuminate his newest album. Begin with its title, Still Here, an assertion that he has learned from life and expressed its lessons in songs. Many have taken note already, including MOJO Magazine (“Gallardo nods to country’s most distant past while sounding like its very near future”), No Depression (“highly recommended to fans of great songwriters”) and, several times, Rolling Stone, who most recently heralded him as one of “10 Artists You Need To Know” in 2017. The times have caught up with Gallardo, whose love for musical tradition and willingness to melt genre barriers anticipated the Americana boom by at least a decade. On Still Here, “The Bitter End” conjures a neon-lit honky-tonk. An ambling beat and jaunty clarinet on “Stay Awhile” suggest a carefree jazz lounge. Raw roots-rock, a storefront church testimonial, an intimate acoustic-and-steel waltz… each track is an echo of something Gallardo heard and filed away until the right lyric came along. And lyrics have always been central to his writing. Poetic sensitivity, honesty, and sprinkles of humor find common ground throughout Still Here. The album opens introspectively with “Something I Gotta Learn” (“I’d face the sideways rain but it’s easier to complain. / Is this my curse or just something I gotta learn?”) and “Kicking Up The Pavement” (“You know I am a proud man. / I never said I was a good man.”) From there, it winds through a landscape of wry resignation with “Same Ol’ Alley Talkin’ Blues” (“Life ain’t easy. In fact it’s rough / until you’ve figured out you’ve had enough”), weary wisdom on “The Losing Kind” (“This life I’ve been living, I’m too old to give it up now. / I’ve been singing to strangers in the hopes that they feel it somehow”), and more. Then, with a pair of farewells, “Ballad Of A Stranger’s Heart” and “Trains Go By,” Still Here leaves us with the knowledge that Gallardo touches us as few artists of our time can do. To longtime listeners, this is hardly news. But Still Here represents something new for Gallardo, a corner turned and a step taken upward toward a new level of creativity. “On every record I’ve released until now, I’ve written everything on my own except for a song here or there,” he says. “For this one, I wanted to step out of that box.” So, all but two songs on Still Here were by Gallardo and a co-writer. Significantly, each is as personal as anything else in his catalog. “I didn’t change much in the way I approached these songs,” he points out. “What changed was the way I approach a melody. I wanted to sing melodies that weren’t like the ones I normally write. I did this to become a better singer. So I reached out to some songwriters I really like.” With Mando Saenz, Robby Hecht, Tim Easton, and other gifted collaborators, Gallardo emerged with a passel of new songs he was eager to record. Beginning with bare-bones demos of voice and acoustic guitar, he recruited a team of musicians who knew how to tap into the spirit of each composition, including Old Crow Medicine Show mandolinist/steel player Joe Andrews, keyboardist Micah Hulscher from Margo Price’s band and Dave Roe, who played with Johnny Cash for 12 years and played on Sturgill Simpson and Dan Auerbach’s last albums. With his writing and performing partners, Gallardo achieved something rare with Still Here: a perfect flow of diverse stories into a single emotional statement. “The title of the album says it,” he says. “I’ve been playing for a long time. It hasn’t always been easy. Lots of opportunities seemed to present themselves and then disap…