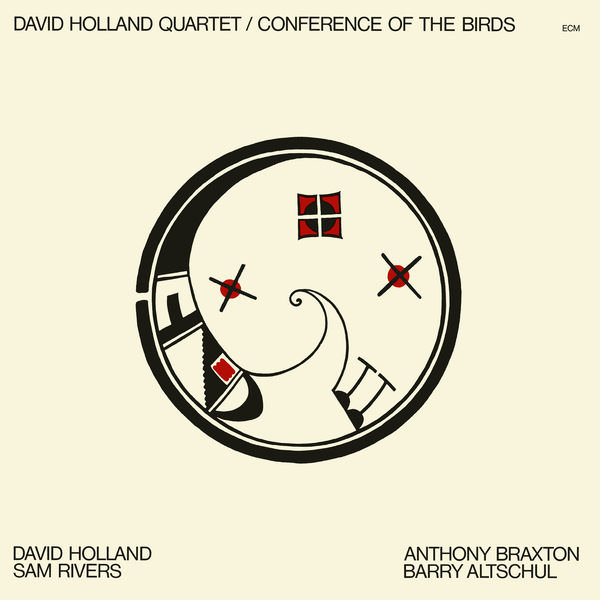 Conference of the Birds is a studio album by the Dave Holland Quartet, recorded in 1972 and released in 1973. It is jazz bassist Holland’s second collaboration with composer and saxophonist Anthony Braxton, as well as his second album on ECM Records. The liner notes describe how birds would congregate each morning outside Holland’s London apartment and join with one another in song.

Dave Holland’s debut as a leader, Conference of the Birds, doesn’t seem to get its proper due outside of avant-garde circles; perhaps, when discussing the greats, Holland’s name simply doesn’t spring to mind as immediately. Whatever the case, Conference of the Birds is one of the all-time avant-garde jazz classics, incorporating a wide spectrum of ’60s innovations. Part of the reason it works so well is the one-time-only team-up of two avant-garde legends: the fiery, passionate Sam Rivers and the cerebral Anthony Braxton; they complement and contrast one another in energizing fashion throughout. But much credit is due to Holland; make no mistake, even though he throws the spotlight to Rivers and Braxton, this is his date. The repertoire consists entirely of Holland originals, and his work here established him as easily the most advanced bassist/composer since Charles Mingus. His compositions show an impressive range: twisting, unpredictable themes accompanied by storming solos (the classic “Four Winds,” “Interception”); free improvisation in group-dialogue form (“Q&A”); inside/outside avant-bop (“See Saw”); and surprisingly lovely, meditative flute showcases (the classic title track, “Now Here (Nowhere)”). No matter how free things get, Holland’s pieces always set up logical frameworks with a clear-minded focus, which makes it easier to get a handle on the advanced musicianship of Holland’s quartet (which also includes drummer Barry Altschul, who played in Chick Corea’s Circle with Braxton and Holland). The absence of a piano frees up Rivers and Braxton to play off of one another, but the task of driving the ensemble then falls to Holland, and his prominent, muscular lines manage to really push his front line all by themselves. This album is a basic requirement for any avant-garde jazz collection, and it’s also one of the most varied and accessible introductions to the style one could hope for. – AllMusic Review by Steve Huey