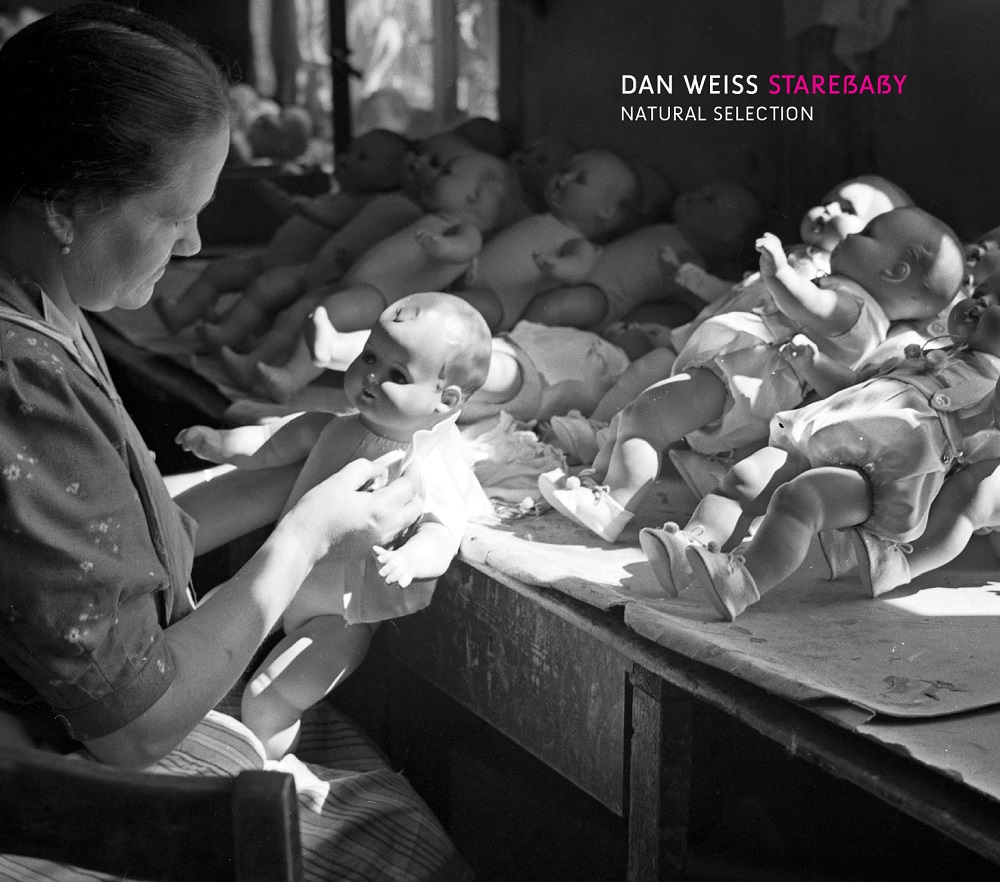 Natural Selection is the highly-anticipated follow-up to drummer/composer Dan Weiss’s 2018 release Starebaby, an unconventional compounding of doom metal, electronic music, and improvisation into a dark and mystic brew. That album was named to many best-of 2018 lists, including Rolling Stone, which described it as “an album that creates its own sonic cinematic reality,” while NPR called it “Astonishing… A true convergence of heavy trudge and spontaneous combustion.” As with Starebaby, the new album is deeply inspired by the 2017 return of David Lynch’s television show Twin Peaks, whose dreamlike, foreboding feel pervades much of this music. The entire group – comprised of a dream-team of musicians who share a love for heavy metal and whose playing is unbound by genre – returns from the first album: Ben Monder (who plays on David Bowie’s Blackstar) on guitar, Trevor Dunn (Mr. Bungle, Melvins, Secret Chiefs 3) on bass, and the twin-keyboard/piano/electronics attack of the exceptionally creative Matt Mitchell and Craig Taborn. The recording of Natural Selection came fast at the end of a run of performances for the band, which helped further cement the group’s unique sound. It’s staggering to contemplate the wide-ranging ability of these musicians: from bone-crunching power to pensive reflection; exacting hits to improvised texture; faith to the compositions and manic improvisation, all played with imagination and conviction.

While John Zorn arguably pioneered jazz-metal fusion with Naked City and Pain Killer in the early 1990s, drummer/composer extraordinaire Dan Weiss took it to an entirely new level with 2018’s Starebaby. His idiosyncratic take offered intricate compositions, with a trademark use of space, texture, and sophisticated improvisation by a stellar ensemble, all grafted onto doom metal appended with electronics. To say it worked is an understatement; Starebaby made many year-end critics’ lists across the globe. Natural Selection goes even deeper. Developed after touring together, the music here emerges in its own genre. Weiss’ band — pianists/keyboardists Craig Taborn and Matt Mitchell, bassist Trevor Dunn (a periodic accomplice of Zorn’s), and guitarist Ben Monder (who played on David Bowie’s seminal Blackstar) execute serpentine compositions that juxtapose jazz and metal amid the strategic use of elements from prog rock, neo-psych, abstract electronica, and ambient music. Opener “Episode 18” commences as Monder, Weiss, and Dunn deliver thrash metal riffs. Doom is referenced only after the keyboardists enter. The tempo slows, then accelerates again as their fragmental melodic palette warps, and haunted electronic textures flit in and out bridging instrumentalists. Halfway through, the players begin improvisationally dialoguing with one another. It’s followed by advance track “Dawn.” A ghostly electronic and tom-tom intro evokes 4AD at its most gothic, amid restrained, interlocking piano, bass, and drum patterns. Monder’s doomy riffs welcome syncopated rhythmic and harmonic interplay before it all melts away in dreamy, proggy neo-psych. “The Long Diagonal” is transcendent, even as its rhythmic and harmonic architectures owe a debt to Frank Zappa and King Crimson with killer shredding from Monder, before the jam transforms — momentarily itself tricky post-bop fusion before its processional expanse resumes. The piano that introduces “A Taste of Memory” sounds a lot like Harold Budd playing meditatively with trademark reverb along a major scale. Distortion, feedback, and a filthy down-tuned guitar riff emerge from the ethereal backdrop. It begins to shift and fragment along droning rhythmic lines as synths and open-tuned bass crowd the drum kit. The piano reasserts itself, angularly coloring it as a processional before evolving into prog fusion. “Today Is Wednesday Tomorrow” is a brief exercise in avant-techno with keyboardists Dunn and Weiss offering razored interaction along a prismatic narrative structure. “Bridge of Trust” actively involves the band from the jump as Weiss’ wildly creative rolls and fills syncopate a moody, and seemingly static, piano progression before driving into the no-man’s-land of abstract, doomy prog. While Starebaby was more visceral, Natural Selection’s more complex compositions offer more musical, textural, and dynamic complexity and imagination. At 80 minutes long, it continues to engage the listener from start to finish with its sophisticated playing and tunes. It offers surprise at nearly every turn, and new revelations with each listen. – Thom Jurek