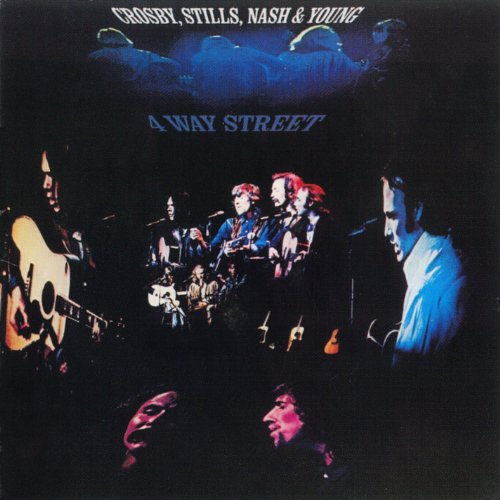 Crosby, Stills, Nash & Young had come out of Woodstock as the hottest new music act on the planet, and followed it up with Deja Vu, recorded across almost six months in the second half of 1969 and released in March of 1970, supported by a tour in the summer of that year. As it happened, despite some phenomenal music-making on-stage that summer, the tour was fraught with personal conflicts, and the quartet split up upon its completion. And as it happened, even Deja Vu was something of an illusion created by the foursome — Neil Young was only on five of the album’s ten tracks — which meant that an actual, tangible legacy for Crosby, Stills, Nash & Young was as elusive and ephemeral to listeners as Ahab’s Moby Dick. But then came 4 Way Street, released in April of 1971: a live double-LP set, chock-full of superb music distilled down from a bunch of nights on that tour that more than fulfilled the promise of the group. Indeed, contained on those original four LP sides was the embodiment of everything great that the unique ethos behind this group — which was not a “group” but four individuals working together — might have yielded. Each of the participants got to show off a significant chunk of his best work, whether presented alone or in tandem with the others, and the shared repertory — “Long Time Gone,” “Ohio” etc. — binding it all together as more than a documentary of some joint appearances. Conceptually, it was all as diffuse as the concept behind the group, but musically, 4 Way Street was one of the great live rock documents of its time, a status that the original vinyl retains along with such touchstones as the Allman Brothers’ At Fillmore East, the live half of the Cream’s Wheels of Fire, and the Grateful Dead’s Live/Dead; some of the extended guitar jams between Stills and Young (“Southern Man”) go on longer than strict musical sense would dictate, but it seemed right at the time, and they capture a form that was far more abused in other hands after this group broke up. Although Neil Young and Stephen Stills had the advantage of the highest wattage on their songs and their jams together, David Crosby and Graham Nash more than manage to hold their own, not only with some strong and distinctive songs, but also with a strong case that less could be more: they reached the more introspective members of their audience, mostly individually, while Stills and Young wowed the crowds collectively. In many respects, this was the greatest part of the legacy that the foursome left behind, though it is also a bit unfair to stack it up next to, say, Deja Vu, as 4 Way Street had the advantage of all four participants ranging freely across a combined 20 years of repertory.