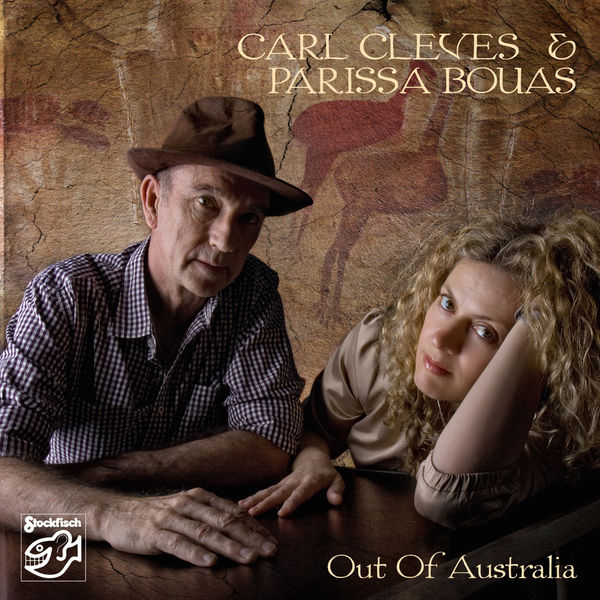 Carl Cleves and Parissa Bouas are a duo from Australia whose fame Down Under is considerable. Their album on Stockfisch is called “Out of Australia”; while these three words certainly bear no small resemblance to the famous “Out of Africa”, you don’t have to be exactly a linguist to deduce that “Out of” is the trademark of an intensely emotional liaison with a country. The truth of this becomes more evident as each track of this disc unfolds.

Parissa’s angelic voice comes close to an invitation; that is, one from water nymphs and ancient dwellers of the woods of mythology. Carl’s warm voice and his guitar-playing make sure that the angels stay in safe contact with Celtic folk tradition. Dreamweavers the two are truly sundancers keeping in safe distance from the abyss.

Listener, when thou comest to Folk music, pray say: thou has heard us singing as our native country bade us to sing.

Carl Cleves, originally from Belgium, has accumulated a bottomless bag of stories, rhythms, languages and guitar styles during his nomadic life, which has led him to perform in almost every continent, resulting in highly original songs. In Brazil where he was a band leader for seven years, he released 2 acclaimed albums. An excellent guitarist, singer and storyteller, Carl’s adventures have included stints as an antelope trapper in Uganda, relief worker in cyclonstruck India, radiobroadcaster and ethnomusicologist in Africa and fisherman in the South Pacific.

Parissa Bouas, is an extraordinary singer and songwriter who finds an emotional context for every genre. In Brazil they named her ‘Patativa’, after a bird renowned for its singing. Daughter of a Greek sailor, she inherited his love of Latin music and honed her formidable percussion skills whilst touring throughout Latin America with an Andean Folkloric group. Parissa has written some classic, catchy songs that people sing around the country, such as “Mother’s Song” – which can be heard on this album “Out of Australia”.