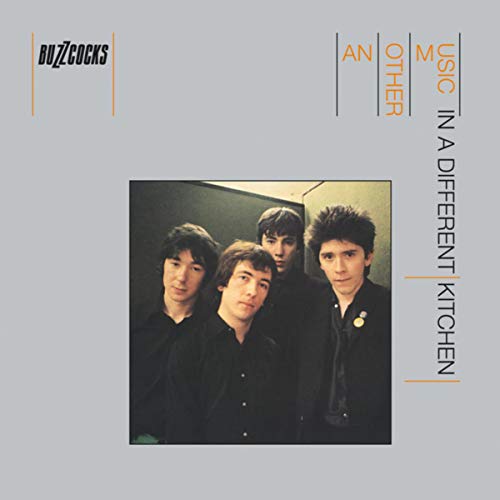 Another Music in a Different Kitchen is the debut studio album by English punk rock band Buzzcocks. It was released in March 1978, through record label United Artists. This was the third line-up of Buzzcocks, with guitarist Pete Shelley singing following the departure of original vocalist Howard Devoto and then the firing of bassist Garth Smith (who had appeared on the “Orgasm Addict”/”Whatever Happened To…?” single). It includes the hit single “I Don’t Mind”, which reached number 55 in the UK Singles Chart in May 1978.

General judgment holds the Buzzcocks’ peerless singles, the definition of punk-pop at its finest, as the best expression of their work. However, while the singles showcased one particular side of the band, albums like the group’s long-playing debut Another Music showcased the foursome’s other influences, sometimes brilliantly. The big secret is Shelley’s worship of Krautrock’s obsessive focus on repetition and rhythm, which transforms what would be “simply” basic punk songs into at-times monstrous epics. The ghost of Can particular hovers even on some of the shorter songs — unsurprising, given Shelley’s worship of that band’s guitarist Michael Karoli. “Moving Away From the Pulsebeat” is the best instance of this, with a rumbling Maher rhythm supporting some trancelike guitar lines. As for the sheer rush of pop craziness, Another Music is simply crammed with stellar examples. Lead-off track “Fast Cars” starts with the opening of Spiral Scratch’s “Boredom”‘s intentionally hilarious two-note solo intact, before ripping into a slightly bemusing critique of the objects in question. Most of the similar tracks on the album may be more distinct for their speed, but Shelley in particular always seems to sneak in at least one astonishing line per song, sometimes on his own and sometimes thanks to Devoto via older cowritten tunes redone for the record. One favorite standout: “All this slurping and sucking — it’s putting me off my food!” on “You Tear Me Up.” Top all this off with any number of perfect moments — the guitar work during the breaks on “Love Battery,” the energizing yet nervous coda of “Fiction Romance,” the soaring angst throughout “I Don’t Mind” — and Another Music flat out succeeds.