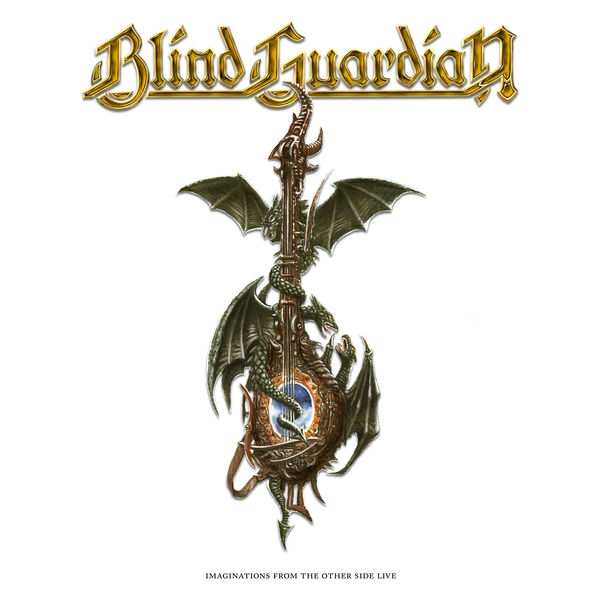 Blind Guardian emerged from western Germany in the mid-’80s with a style that fused gothic- and fantasy-tinged European power metal with the velocity and technical precision of speed metal. Since debuting in 1988 with the thrashy and raw Battalions of Fear, the band has become an institution in power, progressive, and neo-classical metal circles, delivering genre classics Nightfall in Middle-Earth (1998), A Night at the Opera (2002), and A Twist in the Myth (2006), plus orchestral works such as Legacy of the Dark Lands (2019) that skillfully pair fantastical narratives with ace musicianship. Forming in the small German town of Krefeld, members Hansi Kürsch (vocals, bass), Marcus Siepen (guitar), André Olbrich (guitar), and Thomen Stauch (drums) initially called themselves Lucifer’s Heritage, but elected to change it when a 1986 demo tape began to achieve underground popularity. They signed with the No Remorse label and issued the thrash-heavy Battalions of Fear in 1988, following it with the like-minded Follow the Blind a year later, which helped make a name for the band in Japan. Released in 1990, the still speedy but decidedly more power metal-influenced Tales from the Twilight World became an underground hit in Germany and led to a deal with that country’s division of Virgin Records. Their major-label debut, Somewhere Far Beyond, was released in 1992, and helped create the nickname “bards” – taken from the two-part “Bard’s Song” – for the group’s fans. After 1993’s live Tokyo Tales, Blind Guardian hooked up with former Metallica producer Flemming Rasmussen for 1995’s acclaimed Imaginations from the Other Side. Issued in 1996, The Forgotten Tales was a collection of covers and alternate versions, setting the stage for 1998’s breakout hit Nightfall in Middle-Earth, a grandiose, Tolkien-inspired concept album and the band’s first American release. Century Media began reissuing portions of the band’s back catalog in the U.S. the following year, and in 2002, the group released A Night at the Opera, their most progressive and sonically opulent outing to date. 2006’s A Twist in the Myth followed suit, administering copious amounts of guitarmonies and symphonic flourishes, and drawing lyrical inspiration from the likes of Stephen King’s Dark Tower series and and Dante Alighieri’s Inferno. They issued their ninth studio album, At the Edge of Time, in 2010, followed by a compilation of re-recorded and remixed songs called Memories of a Time to Come in 2012. In 2015, the band returned with their tenth studio long-player, Beyond the Red Mirror, a concept album and sequel to 1995’s Imaginations from the Other Side. Around the time of the recording of Nightfall in Middle-Earth, guitarist André Olbrich and vocalist Hansi Kürsch began discussing how they could parlay their newfound power metal momentum into something a bit more ornate. The resulting Legacy of the Dark Lands, an ambitious and all-orchestral double album, was released in 2019 under the amended moniker Blind Guardian’s Twilight Orchestra. – Steve Huey