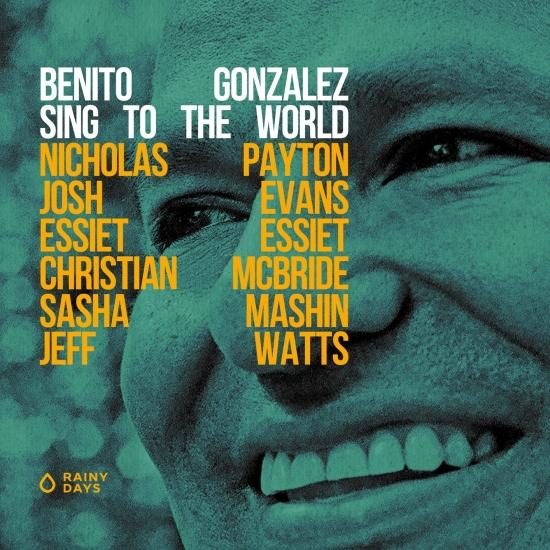 With propulsive pulse and Afro-Latin percussive drive, Benito Gonzalez places rhythm at the core of his exhilarating new album, Sing to the World, set for a May 14 release. All of the ten songs on his fifth album, and first released on the St. Petersburg, Russia label Rainy Days Records, combine to create a sense of wonder and enchantment as Gonzalez takes a stellar step into the future of his jazz journey. He’s assembled an impressive team of collaborators, including Christian McBride, Essiet Okon Essiet, Jeff “Tain” Watts, and Nicholas Payton as well as rising stars Russian drummer Sasha Mashin, trumpeter Josh Evans and saxophonist Makar Kashitsyn.

Sing to The World is a musical exploration of the concept of freedom that recognizes the dignity of us all as individuals. Music is the most powerful tool we have to make a change in the world, uniting as one outside of cultural or religious differences. We are living in a world where all are searching for freedom because its inherently valuable role in human progress. Sing to the World is about this universal search for freedom, about being present, being aware, and trying to allow the moment to come to us. The title track of Sing to the World, with its harmonic invention and pianistic power, is influenced by two McCoy Tyner tunes, “Fly with the Wind” and “Song of the New World.” “McCoy played with so much energy and with such a depth of harmony. If you hear that kind of harmony, you can push the music to its limit. It’s open to infinity. That’s my concept for the whole album—play with openness and trust. That’s what I want to give to the world,” says Gonzalez. As for enlisting jazz powerhouses in the new album, Gonzalez says McBride and Watts embrace the rhythmic core. “They hear the way I perceive the music. They understand where I’m coming from and execute brilliantly. I like strong beats rooted in Africa which is where my father’s ancestors came from. I like it when people dance to this music. Tain and Christian come from the same place. You can hear the dance beats when they play,” says Gonzalez. “The African sensibility and relationship with the drums has usually permeated the best of jazz and American music. Benito embraces that language as part of his commitment to the spiritual, healing part of the music. As a drummer, it’s really fun to play with and bounce off of, in order to get to a vibration that’s vital and always in style.” explains Watts. As for bringing Payton on board, Gonzalez says, “Nicholas is the best trumpet player today, and I thought he would be a great addition for my album giving his direction in the music,” says Gonzalez.