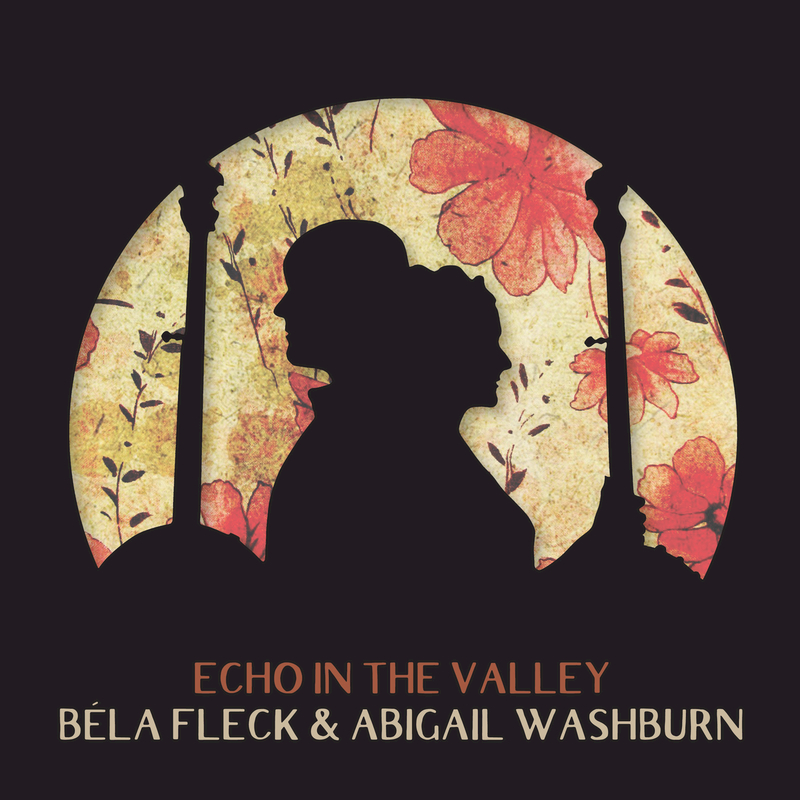 2017 album from the multi-talented couple dubbed “King & Queen of the banjo”. Features “Don’t Let It Bring You Down” & “If I Could Talk To a Younger Me”.

With one eye on using the banjo to showcase America’s rich heritage and the other pulling the noble instrument from its most familiar arena into new and unique realms, Béla Fleck and Abigail Washburn’s second album Echo in the Valley is simultaneously familiar and wildly innovative.

Echo in the Valley is the follow up to Béla and Abigail’s acclaimed, self-titled debut that earned the 2016 Grammy for Best Folk Album. This time around, the mission was to take their double banjo combination of three finger and clawhammer styles “to the next level and find things to do together that we had not done before,” says Béla. “We’re expressing different emotions through past techniques and going to deeper places.” The results are fascinating, especially considering their strict rules for recording: all sounds must be created by the two of them, the only instruments used are banjos (they have seven between them, ranging from a ukulele to an upright bass banjo), and they must be able to perform every recorded song live.

„Though banjoists Béla Fleck and Abigail Washburn have been playing together since well before they married, it took until 2014 for the pair to record a full duet album together. That self-titled effort was a wild outing full of originals, updated takes on traditional folk songs, and a few compelling covers by composer Béla Bartók. Interestingly, they narrowed the parameters of their music-making for Echo in the Valley. For starters, the entire set comprises originals. And there are no guest musicians – only two banjos, Washburn’s voice, and percussion sounds (feet tapping in the floor or a board). Everything that made the record had to be able to be reproduced in a live setting. It features the pair performing on seven different banjos, ranging from a ukulele banjo to an upright bass banjo, with an emphasis on three-finger and clawhammer styles. The few adaptations of traditional tunes include a stunning version of Clarence Ashley’s “My Home’s Across the Blue Ridge Mountains,” alchemically transformed into a ginhouse blues with Washburn’s voice soaring above the pair’s stinging runs and fills, with Fleck even utilizing a slide to add gutbucket rawness to the tune. This date also marks the first time the duo have recorded their almost standard live medley “Sally in the Garden/Big Country/Molly Put the Kettle On.” Lasting nearly eight minutes, it reveals their symbiotic dialogue to be as emotionally resonant as it is musically deft.“

„While the instrumentals are kinetic, creative, and deeply satisfying, it’s the vocal tunes that really make the set stand apart. “Take Me to Harlan,” with its shuffling percussion sounds, walks a line between swing, blues, and bluegrass, with Washburn enunciating each syllable with feeling, nuance, and clever acumen. “Don’t Let It Bring You Down” is a blues delivered as a fuzzed-out, distorted indie rocker with gorgeous vocal syncopation; its subject deals with collective – as in societal – exhaustion experienced by media overload. “If I Could Talk to a Younger Me,” inspired by their young son, commences almost like a lullaby, but becomes a Flatt & Scruggs-esque paean to wisdom. Washburn’s singing allows the words to fall from her mouth like water and Fleck deliberately understates his fingerpicking style as she covers the rhythm and bass notes. Their reading of Sarah Gunning’s “Come All You Coal Miners” finds Washburn channeling Hazel Dickens, while the clawhammer modal breakdown underscores the urgency and tragedy in the lyric. Fleck’s playing just oozes mountain soul. The closer, “Bloomin’ Rose,” is a metaphorical narrative about the environment delivered though vehicles of British and Appalachian folk and hymnody. Stunningly beautiful and haunting, it is an arresting close to a compelling, imaginative album that is sometimes daunting for all the simplicity of its approach. Echo in the Valley is organic music-making at its very best.“ (Thom Jurek, AMG)