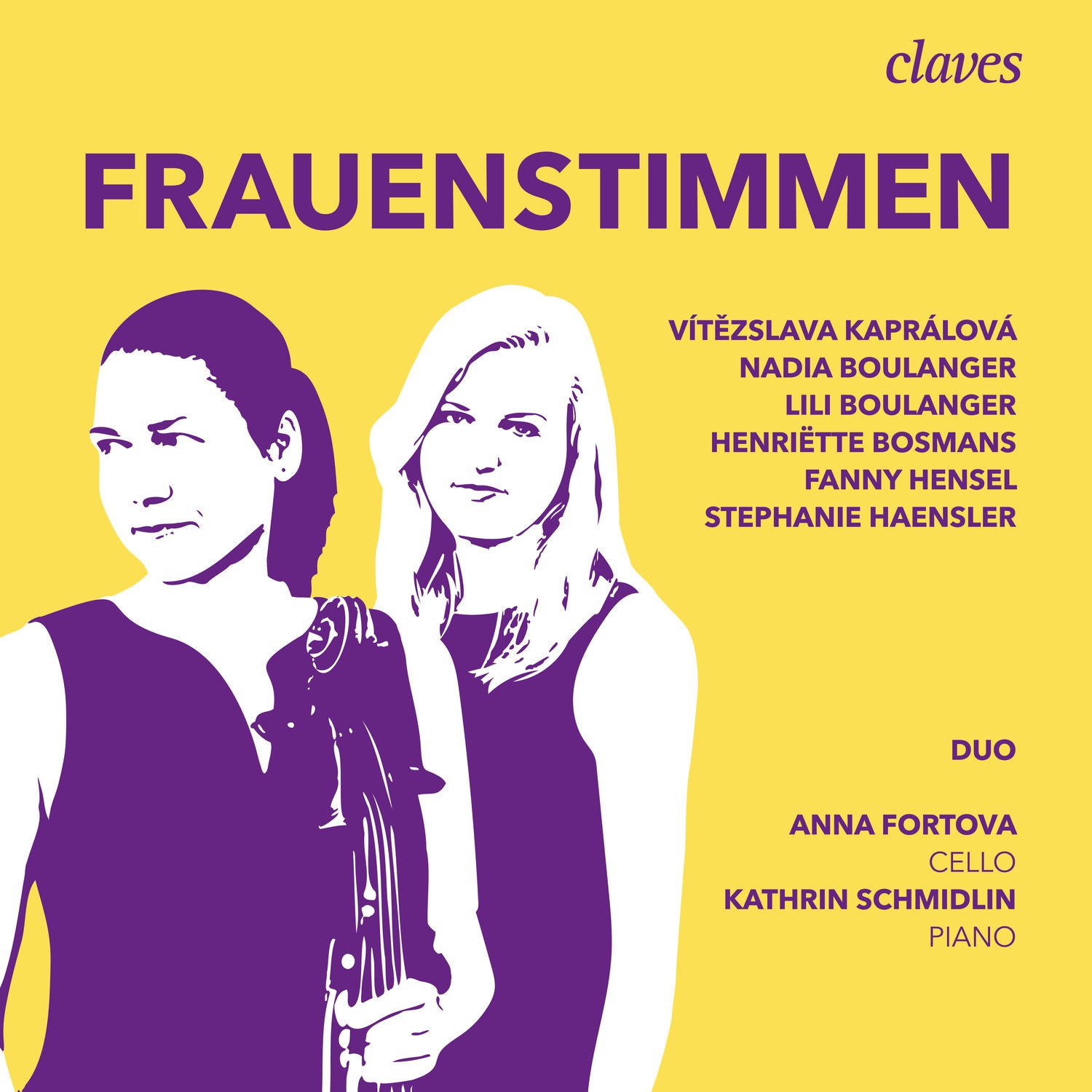 Compositions from both East and West here bring together the powerful voices of six women composers from contrasting cultures. Their music ranges from the Romantic period via Impressionism and Neoclassicism to the present. Vivid impressions alternate with absolute music, strict sonata forms with free forms full of delicate musical poetry.

The standard repertoire of the 19th and 20th centuries, dominated by the male “Bs” Beethoven, Brahms, Bruckner, Bartók and others like them, is increasingly being freshened up by works either long forgotten or suppressed that were composed by women who just happen to have the same initial for their surnames, such as Grażyna Bacewicz, Agathe Backer-Grøndahl, Elsa Barraine, Amy Marcy Beach, Sylvie Bodorová, Mel Bonis, Henriëtte Bosmans, Lili and Nadia Boulanger and Joanna Bruzdowicz.

Lili Boulanger and Vítězslava Kaprálová are united by a tragic fate, for both died at the age of just 24.

Vítězslava Kaprálová (1915-1940) was the daughter of Janáček’s master student Václav Kaprál. She was born in Brno, and was early on recognised as a musical Wunderkind. She took her first piano lessons at the age of five, and began to compose at nine. She trained at the Prague Conservatory, studying composition under Vítězslav Novák, a former student of Dvořák’s, and conducting with Václav Talich. From 1937 onwards she lived in Paris, where she competed her composition studies with Bohuslav Martinů. She enjoyed a resounding success in 1938 when she conducted the world première of her own Military Sinfonietta at the 16th Festival of the International Society for Contemporary Music in London. Her musical motto was: “I want to show the men how it’s done!”. She was only able to complete one of two Ritornelli that she had planned in the year of her death. As can be heard here, it oozes energy.

Nadia Juliette Boulanger (1887-1979) was born and died in Paris. Although she ceased composing at 25, she made her name as a composition teacher. Of her Trois Morceaux (“Three pieces”), the first two began as early organ pieces, while the third is an original work enriched with Spanish elements.

The Parisian composer Marie-Juliette Olga Lili Boulanger (1893-1918) achieved overnight fame when she became the first woman to win the legendary Grand Prix de Rome, with her cantata Faust et Hélène. She was often sick as a child, and she died on 15 March 1918, just ten days before her role model Claude Debussy. It was in Rome in 1914 that she composed the expressive, atmospheric scenes conjured up in her D’un vieux jardin (“Of an old garden”), D’un jardin clair (“Of a bright garden”) and Cortège. The first piece is notable for its bold harmonic shifts, while the other two reveal the influence of Debussy.

Henriëtte Hilda Bosmans (1895-1952) was born in Amsterdam, where she studied at the Conservatory and also privately with the composer Willem Pijper. She composed numerous songs to French texts, several solo works with orchestra, a string quartet and the Sonata in A minor for cello and piano (1919). Mighty chords open the majestic first movement and also close the fourth – thereby closing the circle.

Felix Mendelssohn Bartholdy’s sister Fanny Caecilia Hensel-Mendelssohn (1805-1847) was born in Hamburg, and in 1829 married the painter Wilhelm Hensel. She died in Leipzig. Her cycle Das Jahr (“The year”) of 1841 comprises 12 character pieces, and was composed as a reminiscence of a trip to Italy. The springlike “May” seems to bear within it the spirit of a song without words. The middle section of “July” has a dramatic climax, with ominous tremolandi in the bass; this offers the greatest possible contrast to the melancholic sentiments express in “September. By the river”. In “November”, we hear an autumn storm, “appassionato”.

Stephanie Haensler was born in Baden in 1986 and studied with Robert Zimansky (violin) and Isabel Mundry (composition) at the Zurich University of the Arts. Her composition “ni dónde, ni cómo” (“neither where nor how”) is based on the text of a Chilean women’s artists’ collective, protesting about violence against women. She composed it to a commission from Kathrin Schmidlin and Anna Fortova to commemorate the fiftieth anniversary of women’s suffrage in Switzerland in 2021. She here explores the question as to where freedom begins, and what it means to have a voice and the right to express yourself and to have a say in things.

The many sophisticated expression markings and performance instructions here use the subtlest emotional nuances to provide a voice to oppressed, maltreated women. This work’s profound exploration of sound and noise displays the brilliant mastery of this socially committed composer.