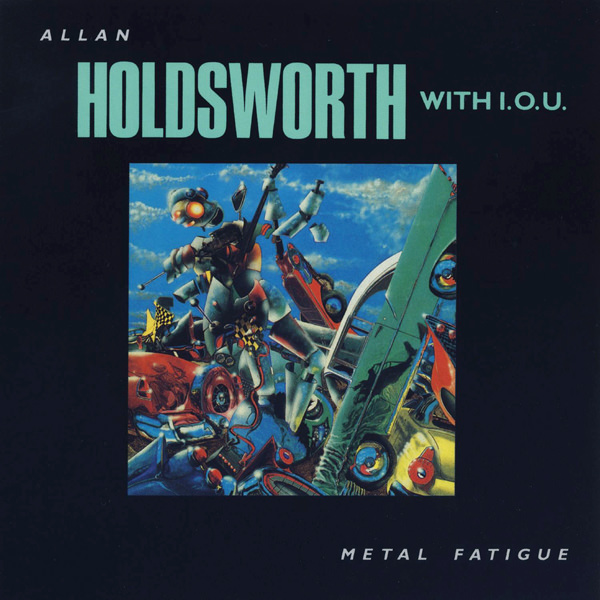 This 1985 jazz fusion album from influential guitarist Allan Holdsworth was remastered and reissued as part of a series in 2012. Holdsworth’s core band of keyboardist Alan Pasqua, bassist Jimmy Johnson and drummer Chad Wackerman is augmented by vocalists Paul Korda and Paul Williams and bassist Gary Willis and drummer Gary Husband, who play on the epic 14 minute The Un-Merry-Go-Round.

Criminally unknown and underappreciated, Allan Holdsworth is one of the greatest musicians ever to pick up the electric guitar. Here, on 1985’s Metal Fatigue, everything finally comes together for him. For the majority of this record, Holdsworth is joined by bassist Jimmy Johnson and drummer Chad Wackerman, and these two musicians, virtuosos in their own right, complement Holdsworth beautifully (check out Johnson’s wonderful part in “Home” and lovely solo on “Panic Station”). The leader is known for his extremely legato phrasing and rich harmonic vocabulary, both of which are on display in the solo and frantic fills of “Metal Fatigue.” Anchored by Paul Williams’ vocals, the song is marvelously constructed, with a strong verse melody supported by Holdsworth’s upper-register guitar chords. The guitarist’s much-vaunted whammy bar work is also on full display here. Certain fills in “Metal Fatigue” are almost queasy sounding, as Holdsworth bends and slurs in impossible ways. His use of the tremolo bar comes out not only during his melodic playing, but also during his rhythm playing, where he allows his chords just a trace of shimmer, enough to lend body to his playing but not enough to blur the harmonies. The influence of Holdsworth’s unique style is evident in the work of such rock guitarists as Eddie Van Halen and Alex Lifeson (listen to VH’s “Drop Dead Legs” or Rush’s “YYZ” for a taste of this connection), but the watered-down and otherwise assimilated adaptations of his style pale compared to the unadulterated stuff. One of the most important fusion records of the ’80s is also Holdsworth’s best work. Absolutely essential for those who like their rock with a healthy dose of jazz. –AllMusic Review by Daniel Gioffre