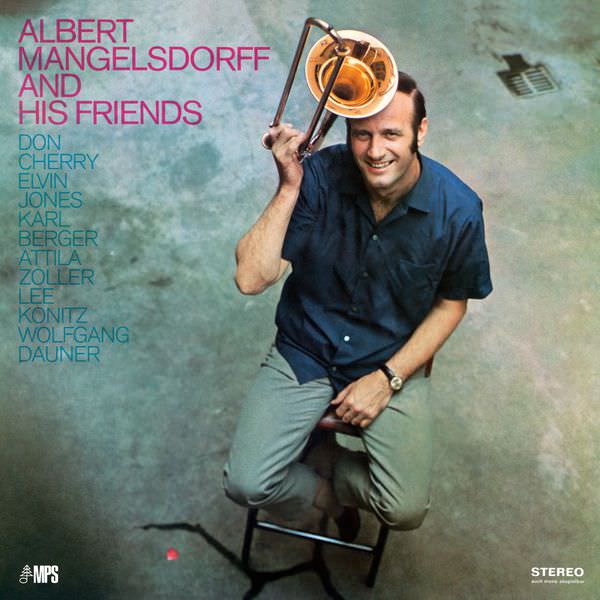 The afterlife for Hans Georg Brunner-Schwer’s storied MPS Records has been tough to track. After Brunner-Schwer sold the rights to Philips in the early ’80s, the label changed hands several times—Polydor picked it up and passed it through a subsidiary, Universal Music Group acquired its holdings, Speakers Corner Records took over on the vinyl side of the equation, and then Edel AG finally acquired it in 2014. Now, in an effort to make the most out of this German imprint’s back catalog, MPS’ current owners are digging into the vaults to bring us some special projects that deserve to be dusted off. Don Ellis’ Soaring (MPS Records, 1973), built with his signature fusion aesthetic and containing Hank Levy’s now-(in)famous “Whiplash,” is one of them; the Kenny Clarke-Francy Boland Big Band’s All Smiles (MPS Records, 1968), presenting a swinging intercontinental ensemble with the likes of Benny Bailey, Johnny Griffin, and Jimmy Woode in the mix, is another; and this compelling gem from trombone maverick Albert Mangelsdorff is the third item to round out the early summer reissues list for 2017.

Mangelsdorff, one of the most adventuresome individuals to ever wield a slide, recorded quite a bit for MPS, appearing as leader, sideman, and equal collective partner on a variety of dates. This particular album, a one-of-kind entry that presents the trombonist in duo performances with six of his fellow jazz nonconformists, came into being while the label was in its infancy. These six tracks were recorded between the close of 1967 and the middle of 1969, bringing Mangelsdorff into contact with his playmates in different places and times. The lead-off track—“I Dig It -You Dig It,” captured while Mangelsdorff was at The Baden-Baden Free Jazz Meeting in December of 1967—pairs the trombonist with cornetist Don Cherry. Passionate blowing, puckish and puckered wit, vocalization, and minimalist tidings, courtesy of a Terry Riley motif, carry the day. “My Kind Of Time” follows, bringing Elvin Jones to the plate for an appropriately swinging soiree. This particular track, shining an obvious light on rhythmic dialogue and Jones’ percussive undertow, was captured after the close of the Berlin Jazz Days in May of 1968.

The four tracks that follow are just as fresh as those opening offerings. There’s “Way Beyond Cave,” a quizzical, searching encounter with Karl Berger’s vibraphone; a sly “Outox,” giving pause to admire the interplay and melodic simpatico that connected guitarist Attila Zoller to the man of the hour; a creatively cool-blooded “Al-Lee,” bringing the trombonist into contact with one of his musical models—saxophone icon Lee Konitz; and a shimmering send-off in the form of “My Kind Of Beauty,” a romantic seven minutes of music that highlights pianist Wolfgang Dauner’s talents without leaving Mangelsdorff in the cold. The whole album is compact—less than forty minutes in length, fitting the era and the original format—and nothing more is needed. These six tracks say it all, and mastering engineer Christoph Stickel did a fine job sprucing up the sound without actually altering the sonics endemic to the original. There’s only one thing left to say about MPS reissues to the good people at Edel: more please!