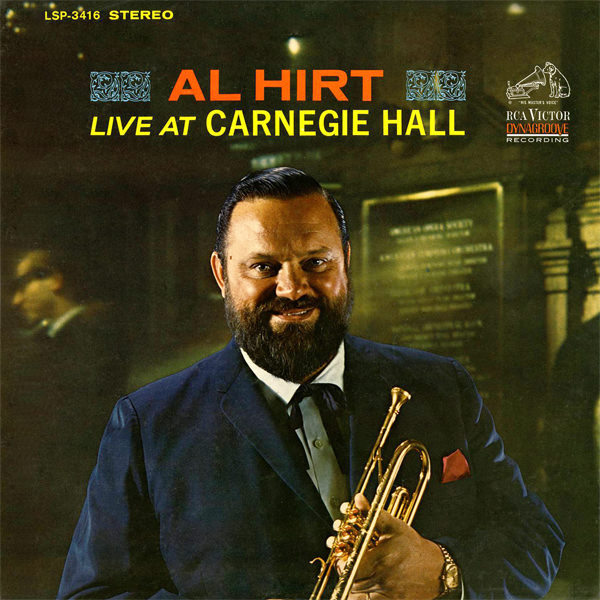 By 1965, trumpeter Al Hirt was a commercial success, although from the jazz standpoint most of his output for RCA was becoming increasingly forgettable. Although he was joined by the Gerald Wilson Orchestra for nine of the 13 selections on this live LP, all of the selections (other than a six-minute rendition of “Carnival of Venice”) are quite brief, with several under two minutes. Hirt shows off his technique on a variety of showy devices, but every note sounds planned in advance, whether it be “Bye Bye Blues,” “Down By the Riverside” or a remake of his hit “Java.” –AllMusic Review by Scott Yanow

A virtuoso on the trumpet, Al Hirt was often “overqualified” for the Dixieland and pop music that he performed. He studied classical trumpet at the Cincinnati Conservatory (1940-1943) and was influenced by the playing of Harry James. He freelanced in swing bands (including both Tommy and Jimmy Dorsey, and Ray McKinley) before returning to New Orleans in the late ’40s and becoming involved in the Dixieland movement. He teamed up with clarinetist Pete Fountain on an occasional basis from 1955 on, and became famous by the end of the decade. An outstanding technician with a wide range, along with a propensity for playing far too many notes, Hirt had some instrumental pop hits in the 1960s. He also recorded swing and country music, but mostly stuck to Dixieland in his live performances. He remained a household name throughout his career, although one often feels that he could have done so much more with his talent. Hirt’s early Audiofidelity recordings (1958-1960) and collaborations with Fountain are the most rewarding of his long career; he died at his home in New Orleans on April 27, 1999. –Artist Biography by Scott Yanow