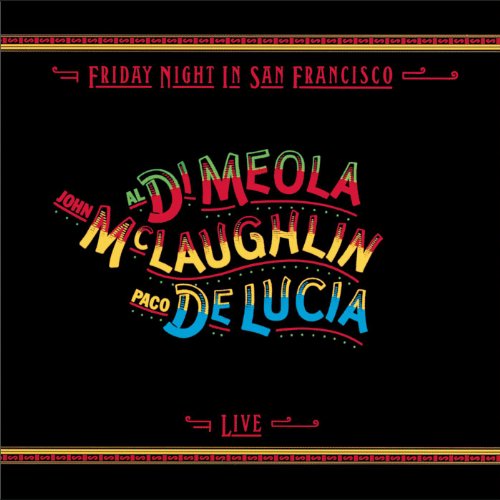 This live recording from 1980 matched fusion guitar heavyweights Al DiMeola and John McLaughlin with Spanish guitar whiz Paco DeLucia. The result, a dazzling technical display, also earned jeers as the international summit of world-class finger-wigglers by critics who felt it was long on chops and short on heart. John McLaughlin’s importance to the development of the jazz fusion scene can’t be overestimated: as the guitarist on Miles Davis’s seminal Bitches Brew and A Tribute to Jack Johnson, he was the first significant guitarist of the electric jazz era; on his own, he brought power rock, spiritualism, and lush orchestration to the scene via his Mahavishnu Orchestra. DiMeola, the most commercially successful next-generation fusion guitarist, achieved stardom with Chick Corea’s group Return to Forever and on his own records. DeLucia, virtually unknown in the U.S., is a fine flamenco guitarist, and it is that orientation more than anything that colors Friday Night: even when playing straightforward non-flamenco compositions, the phrasing and sensibility lurks behind every note. Still, the passion of the music is frequently marred by the participants’ inability to play at anything but the most breakneck pace. –Fred Goodman