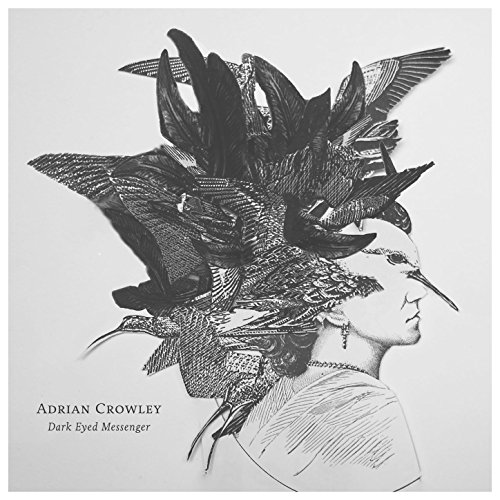 On his eight full-length, singer/songwriter Adrian Crowley enlists Brooklyn pianist, producer, and musical companion Thomas Bartlett (aka Doveman). The latter is no stranger to working with those who make music from poetic, interior spaces. He has collaborated with Martha Wainwright, Sufjan Stevens, Magnetic Fields, and Anna Calvi, to name a few.

Crowley himself is no stranger to chamber and orchestral elements on his records — check 2014’s glorious Some Blue Morning for evidence — but they have always been employed in orthodox ways, buoying melodies and providing dramatic backdrops. That’s far from Doveman’s M.O. on Dark Eyed Messenger. In the four days of sessions that resulted in this album, he adorns Crowley’s poignant, sometimes sorrowful songs with pianos, Mellotrons, muted loops, ambiences, Doug Weiselman’s clarinets, and samples of chamber strings and other orchestral instruments. The latter are deconstructed and manipulated to fit into the spaces within and between melodies. They append Crowley’s sung lyrics rather than function as sonic window dressing. Check the way strings are plucked and layered in reverb in “Halfway to Andalucia.” Inside their embrace, Crowley’s protagonist freely admits (via letter) his vulnerability to an ex-lover as he flees to another country rather than attend her wedding. Hannah Cohen’s barely discernible backing vocals add an element of otherness that underscores the emotional upheaval that transpires (wherever she appears, she’s magical). “Silver Birch Tree” seems to emerge from the ether (its ambience and orchestral frameworks recall Jan Bang’s fragmented use of two-chord motifs) as support for Crowley’s rich baritone, and describes the feeling of a woman carving her initials into his side (he’s the tree). “Catherine in the Dunes” is a waltz where layered, reverbed Mellotrons, an organ, and string samples wind around Crowley’s double-tracked vocals as he describes seeing a woman gathering reeds and feeling hopeless as he realizes this is as close as he’ll ever get to her. The strings almost swell as an electric guitar and muted percussion add to Crowley’s grainy yet wistful desire. “And So Goes the Night” falls in around a lyric about a tenuous wanderer making his way through a city surrounded by shadows. Closer “Still This Desire” emerges with single piano notes under warm reverb, ambient spaces falling in the backdrop as Crowley sings: “You can rip it up into tiny pieces/Dip it in paraffin and set it alight….” as a haunted parlor room piano and blurry strings caress the bars between verses. It’s a hushed ballad, with instrumental moments that promise tension then surrender, allowing the want, the loss, and the eternal to possess Crowley’s narrative and carry it into a final silence. Dark Eyed Messenger is easily the songwriter’s most intimate and sparsely decorated album thanks to assistance from Doveman. Their pairing amounts to a nearly alchemical wonder that gives us one of the songwriter’s best offerings.