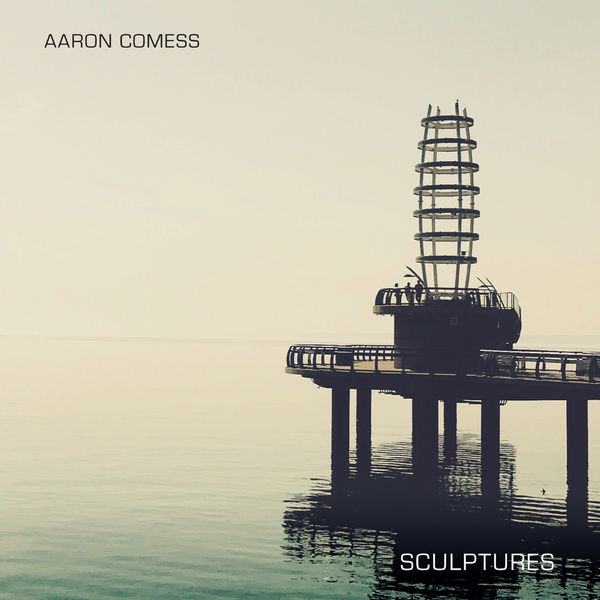 The British might call the new album by drummer Aaron Comess, Sculptures, a “curate’s egg.” It’s instrumental music, so as likely to be filed under “jazz” as anywhere else, but the focus is not on linear improvisation over changes or, for that matter, free improvisation either. Rather, it’s a collection of performances running from two to seven minutes based on tight harmonic kernels, with a strong emphasis on texture rather than melody. Comess drummed for the Spin Doctors and Joan Osbourne among other artists, and presumably those mid-nineties gigs left him with a war-chest to finance experimental projects like this.

The album focuses on Comess’ compositions rather than his drumming: no long percussion-clinic demonstrations here. Leon Gruenbaum’s “samchillian relative-pitch synthesizer” and Grey McMurray’s guitars get more spotlight, but neither Gruenbaum nor McMurray are interested in chops-heavy fusionesque exploits. Press materials stress the micro-tonal possibilities of Gruenbaum’s homebrewed synth, but in practice he pushes the boundaries of texture (and, occasionally, good taste) rather than tonality. There’s nothing here to give the listener flashbacks to a Joe Maneri album.

The album frontloads the harshest and most challenging tunes a brave if potentially off-putting choice. Around track three, though, things settle down to an approachable brand of instrumental rock, so if you’re planning to put this on as background music at a party, that’s where to drop the needle. Don’t come here for mind-blowing improv, but if you’re curious to hear a project by someone associated with the Spin Doctors that doesn’t make you want to do violent things to kittens, Sculptures is worth checking out. Just shy of thirty-seven minutes long, it won’t outstay its welcome.