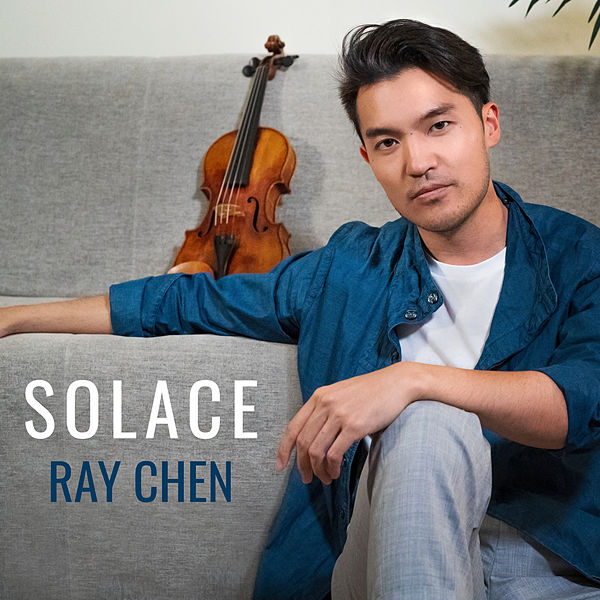 Award-winning violinist Ray Chen, described as “the ray of sunshine in the violin world” by The Times, has announced his new studio album Solace, professionally recorded and released from his home during the global lockdown, will be digitally released on 7 August 2020. Solace features six movements from J. S. Bach’s Six Sonatas and Partitas for Solo Violin representing the personal and powerful feelings Ray Chen has experienced this year.

When Ray Chen released his superlative 2018 debut album for Decca, “The Golden Age”, with its headline act of Bruch’s Violin Concerto with the London Philharmonic Orchestra under Robert Trevino recorded in London’s Henry Wood Hall, no one could have dreamed that his follow-up would be a half-length album of solo Bach, self-recorded in a brand new self-erected studio in his own home. However such has been the story of 2020, and beyond Chen deserving a clap on the back for even going to these lengths to produce a professional-grade recording during a pandemic lockdown, to my ears “Solace” is actually as strong as “The Golden Age” in its own special way.

As for the details of Chen’s programme, it consists of six movements from Bach’s collection of sonatas and partitas for solo violin, selected “to represent the personal and powerful feelings he has experienced during this year”.

As for how successful the end result is, to serve up this particular repertoire as a pick and mix of isolated movements inevitably loses some of its inherent narrative, and many would argue its profundity. However if you can get on board with appreciating each of these movements as fragmentary snapshots, then there’s much to both admire and enjoy here. Indeed, when artists can be so angst-ridden over when is “the right time” in their career to take the solo Bach sonatas and partitas into the recording studio, Chen’s lockdown interpretations strike for their sheer unselfconsciousness. You don’t remotely sense that he’s feeling the pressure of generations of great violinists’ recordings. They’re simply a snapshot of where he is right now, via music he wanted to play for its own sake; and the result is that it all exudes integrity. Not least because in every way imaginable it’s very audibly Chen: silvery, lithe and alive to melodic beauty; abounding in energy while equally abounding in refinement; quick to spot potential for humour.

The opening Preludio from Partita No. 3 in E major delights from the off, with the swiftness of Chen’s smooth flow beautifully melding Bach’s implied harmonies together in the air. The ensuing Fugue from Sonata No. 1 in G minor doesn’t hang around either, but more than its forwards momentum it’s Chen’s sense of developing musical argument and overall architecture that holds the ear. No less grabbing is the pressing tension of the Allegro from Sonata No. 2 in A minor, with its nervously clipped rising figurations.

But Chen saves the best for last. Off the back of those A minor gasps comes first the Largo from the Sonata No. 3 in C major, exuding tenderness and intimacy, and with its upper-register lines sounding breathtakingly sweet and fragile. Then finally we circle back to the Partita No. 3 in E major for its Gavotte en Rondeau – a deliciously dancing reading over which Chen plays with us, pulling us into a guessing game over how hard he’ll emphasize each first beat, how he’ll vary the dynamics and articulation, and whether and when he’ll slip the next pause or rubato into the mix.
Perhaps one day Chen will record the complete Bachs, and if he does then it’ll be fascinating to listen to these alongside them. For the moment though, enjoy them for what they offer in the here and now. – Charlotte Gardner