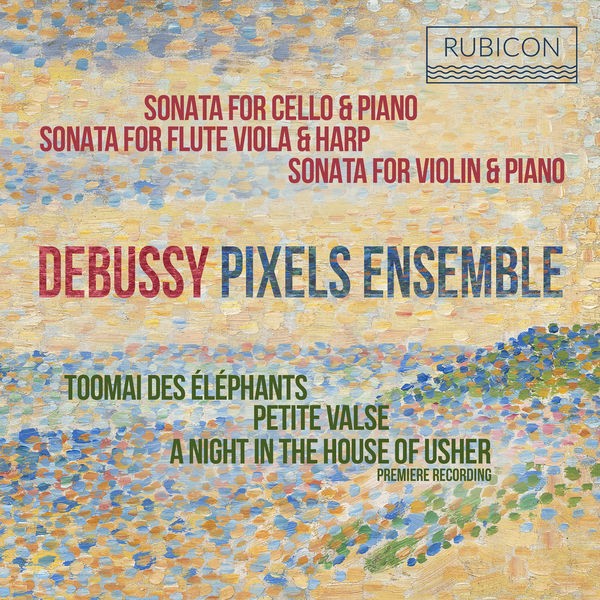 Pixels Ensemble is a versatile chamber music collective with a shared passion for performing the finest repertoire, from the classical period to the present day. Its players are all established soloists, chamber musicians, recording artists, orchestral principals and explorers of contemporary music. Formed in 2016 by pianist and director Ian Buckle, the group appears in a wide range of line-ups and combinations, lending itself to innovative programming and enabling huge variety within individual concerts. Recent engagements include appearances at Liverpool Philharmonic, the Holywell Music Room in Oxford and Conway Hall in London; and the group enjoys a close association with the University of Liverpool.

Debussy was seriously ill at the outbreak of World War I, and struggled to compose. A wartime performance of the Saint- Saëns Septet prompted the composer to consider writing chamber music again – for the first time since his string quartet of 1893. The plan was for a sequence of six sonatas for diverse instruments, harking back to the 18th century practice in France. The composer wrote ‘I wrote like a fury or like one who is doomed to die the next morning’.

He viewed these works as a memorial to the young French soldiers killed in the trenches. The Cello Sonata was premiered in Paris in 1916 by a young infantry-man on a cello made from an ammunition box and an old door. His health declining further, the Violin Sonata, turned out to be his last work. Debussy dismissed it as ‘an example of what may be produced by a sick man in time of war’. The final three sonatas were never composed.

This album concludes with three rarely heard piano pieces completed by Robert Orledge. Toomai des éléphants inspired by Kipling was originally intended as No. 11 in the Second Book of Preludes. Petite Valse, began as an 18 bar outline sketched in 1915, and receiving its world premiere recording, A Night in the House of Usher is a fantasy for piano (or organ) compiled from Debussy’s sketches for the one act opera (1915-17) after Edgar Allan Poe which was left unfinished.