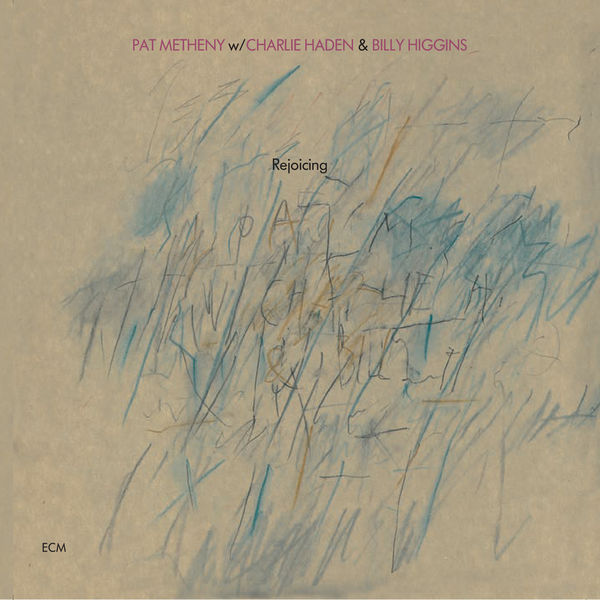 “Rejoicing” is an album by the guitarist Pat Metheny that was released in 1984 by ECM. It features the guitarist in a trio with Charlie Haden on bass and Billy Higgins on drums, both of whom played and recorded with Ornette Coleman in the late 1950s and early 1960s. In addition to his own compositions, Metheny plays three compositions by Coleman, and Horace Silver’s Lonely Woman (not to be confused with the Coleman composition of the same title, which Metheny does not play on the album).

Those of you who, like me, hold Bright Size Life in high esteem as one of Pat Metheny’s best can take comfort in this, his second trio album for ECM, even if the presence of Ornette Coleman’s onetime rhythm section of bassist Charlie Haden and drummer Billy Higgins creates an entirely different result. As on the scratched cover, the names are distinct to a careful eye, but eventually comingle into a unified sound that bubbles with color and shades of intensity.

The session saunters into our hearts with an arresting version of Horace Silver’s “Lonely Woman.” Metheny’s acoustic leads a supremely attuned Haden, who plunks the ether like a giant rubber band as Higgins rustles an autumn’s worth of leaves with his brushes. It is through this play of light and shadow that we find solace in “Tears Inside,” a strangely upbeat affair for which Metheny breaks out the subtle sere of his electric. “Humpty Dumpty” is an even more visceral jaunt through storybook phrasings and fluid guitar licks. The short but sweet title track completes the Coleman half of the album and features some dexterous runs, matched step for step by Higgins’s cymbal work and Haden’s own nimble jaunts. Higgins has one of the most precise snares in the business, as evidenced in his solo. Haden stretches an unassuming flair in “Blues For Pat,” which also boasts Metheny’s most present solo on the album and more percolating beats from Higgins. “Story From A Stranger” reprises Metheny’s shimmering acoustic, which glistens with a backcountry charm, seeping like morning light into a log cabin of secrets. Against this perfect backdrop, Metheny’s soloing reaches some of its most revelatory ever recorded. Another Metheny original, “Waiting For An Answer,” makes for an enigmatic, arco-laden closer.

The album’s only misstep is “The Calling,” the synth guitar of which doesn’t quite jive with me (though flashes of brilliance do appear, as in the ascent at 7:20). And while I do appreciate the improvisatory spirit behind this track, I only wish it had been more properly amped, for at nearly 10 minutes it throws off the delicate balance of its surroundings. But don’t let this one personal caveat deter you from basking in the beauties of those surroundings.

“Pat Metheny takes a vacation from his Group and performs advanced material with bassist Charlie Haden and drummer Billy Higgins. In addition to Horace Silver’s “Lonely Woman,” Haden’s “Blues for Pat,” and three Ornette Coleman tunes, the guitarist plays three of his originals here, including “The Calling,” a lengthy exploration of sounds with his guitar synthesizer. Throughout this excellent set, Metheny and his sidemen engage in close communication and create memorable and unpredictable music.” (Scott Yanow, AMG)