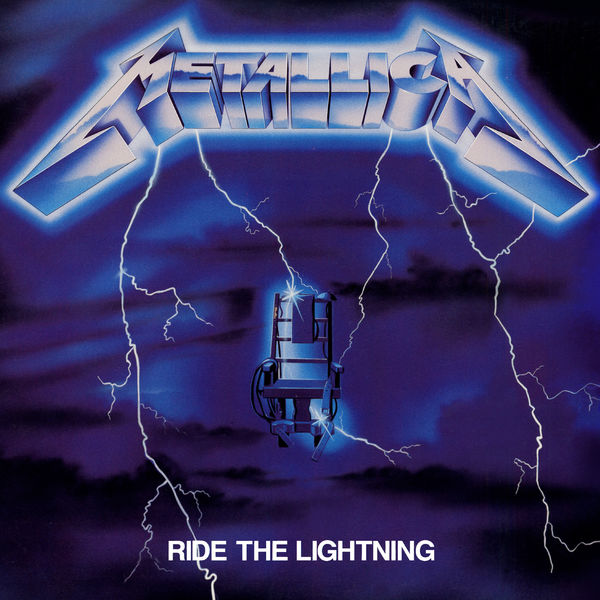 Ride the Lightning is the second studio album by American heavy metal band Metallica, released on July 27, 1984, by the independent record label Megaforce Records. The album was recorded in three weeks with producer Flemming Rasmussen at the Sweet Silence Studios in Copenhagen, Denmark. The artwork, based on a concept by the band, depicts an electric chair being struck by lightning flowing from the band logo. The title was taken from a passage in Stephen King’s novel The Stand. Although rooted in the thrash metal genre, the album showcased the band’s musical growth and lyrical sophistication. This was partly because bassist Cliff Burton introduced the basics of music theory to the rest of the band and had more input in the songwriting. Instead of relying heavily on fast tempos as on its debut Kill ‘Em All, Metallica broadened its approach by employing acoustic guitars, extended instrumentals, and more complex harmonies. The overall recording costs were paid by Metallica’s European label Music for Nations because Megaforce was unable to cover it. It is the last album to feature songwriting contributions from former lead guitarist Dave Mustaine, and the first to feature contributions from his replacement, Kirk Hammett. At 47 minutes, it is Metallica’s shortest studio album.

“Don’t let that classical-guitar-ish opening to “Fight Fire with Fire” fool you–Ride the Lightning packs a heavy-metal wallop. While not as ambitious as the subsequent Master of Puppets, this early Metallica album is indubitably one of their best. Thematically, it explores death and dying from myriad points of view: nuclear war (“Fight Fire with Fire”), electric-chair execution (the title track), and drowning (“Trapped Under Ice”). Interestingly, the best track on this album is probably “Fade to Black,” a slower, more introspective song about suicide. There’s also “Creeping Death,” which remains a concert favorite. An excellent mix of rapid-fire guitar riffs, rip-roaring solos, and singer James Hetfield’s trademark growl, this is thrash metal at its finest. Very highly recommended.”(Genevieve Williams)