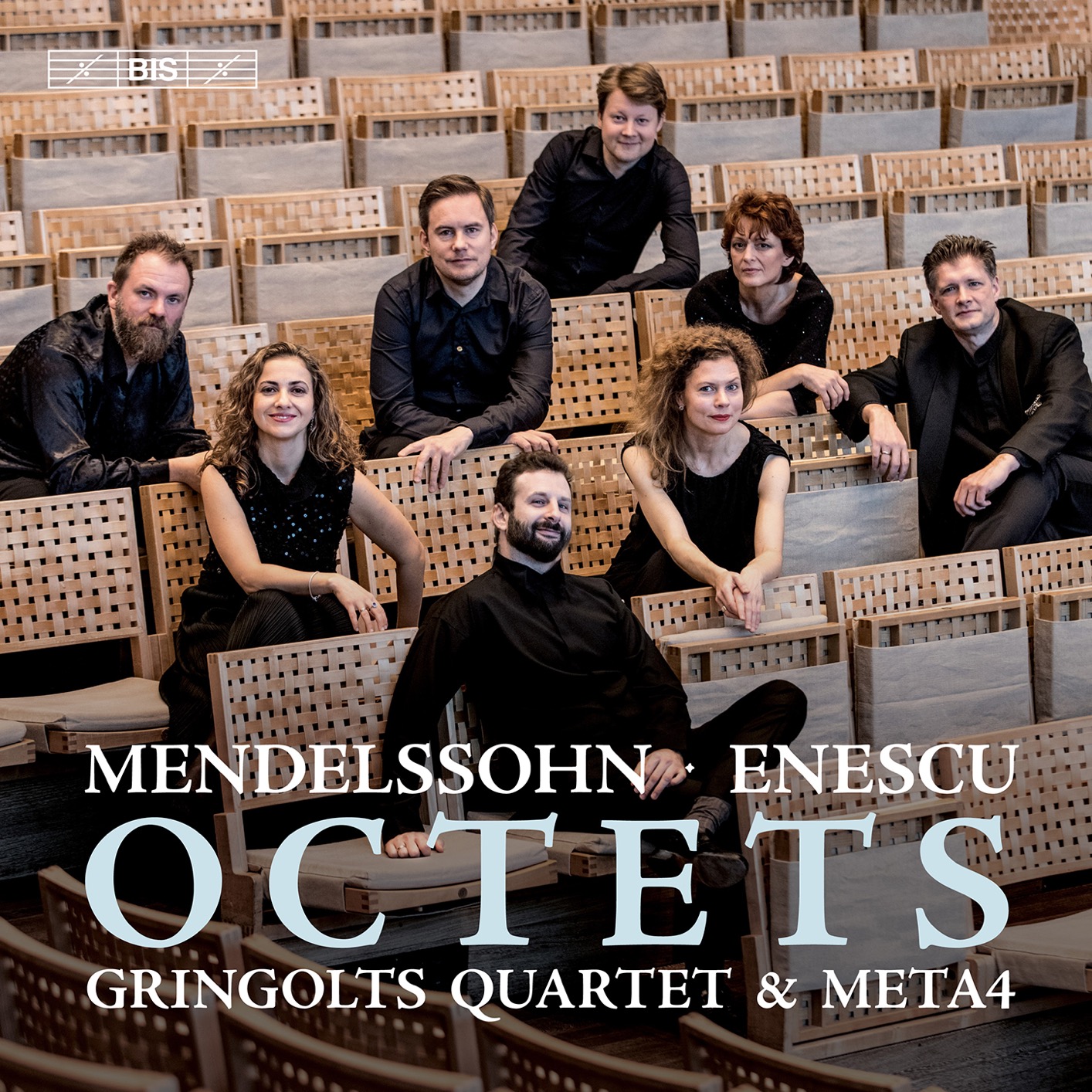 Before Felix Mendelssohn produced his Octet for strings in 1825, only Louis Spohr had composed for a similar combination of instruments. Rather than an octet, however, Spohrs work was a double quartet written for two equal but independent string quartets. Mendelssohn, on the other hand, treated the eight instruments as a single unit, collaborating in symphonic orchestral style, as he himself put it. He was only sixteen when he composed the Octet, full of a youthful ardour that has made it one of his most popular works. It is a farewell to the Mozartian style that had characterized Mendelssohns early production and at the same time a first step on the way to Romanticism. The second octet on this disc is also a youthful work written at a time of transition, now from Romanticism to Modernism: George Enescu was 19 years old when he completed his Octet in C major in December 1900. The work is concentrated, complex and highly contrapuntal, a sounding illustration of what Enescu elsewhere described in words: I am by nature a polyphonist, not at all an advocate of sequences of pretty chords. I have a horror of anything that stagnates. For me, music is not a state but rather an action Among the small number of works for this instrumental combination, these belong to the very finest, and are here performed by two of todays leading quartets: the Gringolts Quartet and Meta4 have both made numerous acclaimed recordings in the most diverse repertoire.

Mendelssohn’s precocity is simply stunning. In a lot of ways, it reminds us of Mozart’s, but Mendelssohn’s early pieces are even more impressive in terms of quality and expressiveness. When, at the age of 16, Mendelssohn composed his famous Octet, a piece whose perfect style never ceases to amaze us, the teenager had already written a lot of music, including twelve symphonies for string orchestra, many concertos and five operas.

With this Octet, composed in what he called “the style of an orchestral symphony,” Mendelssohn created a score in eight parts, as opposed to the double quartet explored in his earlier pieces. Mendelssohn wrote the piece as a gift to his teacher, Eduard Ritz. He always remembered it with delight and cherished it throughout his short life.

Featured in the record as well, Georges Enesco (or Enescu) was also a precocious artist. Enesco joined the Conservatoire de Paris at age 14 as a composer, violinist, and pianist. He was just slightly older than Mendelssohn (19 years-old) when he composed his own Octet for strings in 1900. In this piece, for the first time, he progressively renounced his romantic influences and gave shape to his own language. If Mendelssohn’s work relied mostly on melody, that of young Enesco’s is built around a skillful counterpoint, moving forward with softness and determination. Commenting on the piece years later, Enesco wrote: “An engineer launching his first suspension bridge over a river, could not feel more anxiety than I felt when I set out to darken my paper”. – François Hudry