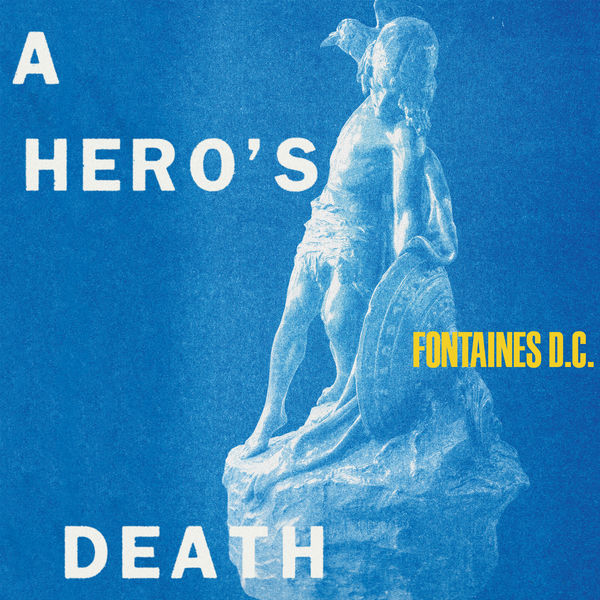 Barely a year after the release of their hugely acclaimed debut album ‘Dogrel’, which earned a Mercury Prize nomination and Album of the Year 2019 at both BBC 6Music and Rough Trade record store, Dublin’s Fontaines D.C. have returned with an intensely confident, patient, and complex follow up album. A Hero’s Death arrives battered and bruised, albeit beautiful – a heady and philosophical take on the modern world, and its great uncertainty.

The extreme tension and sincere rage of Dogrel, their first album, is still resonating as Fontaines D.C. strike again while the iron is hot. However, with A Hero’s Death, the Dublin band have shifted gear. They’re still taking their influences from the post-punk scriptures of The Fall, Joy Division, Gang Of Four and Public Image Ltd., but this “difficult second album” also goes in other directions. The slow, almost oppressing rhythm on the opening I Don’t Belong introduces the band’s new image. This image is that of a group dealing with the instantaneous success of their first album and the weighty tour that followed. Fontaines D.C. broaden their scope with ballads like Sunny and its baritone guitars, remisiscent of Indian summers, or Oh Such a Spring on which Grian Chatten sings with extraordinary delicacy. But A Hero’s Death also has the unstoppable clout that made Dogrel so good, anthems on which Chatten infinitely repeats the same phrase like “Life ain’t always empty”, belted out thirty times on the title track, A Hero’s Death, and “What ya call it, what ya call it, what ya” on Televised Mind… From the beginning, A Hero’s Death oscillates between incredibly rebellious and juvenile tension and more meditative, almost nostalgic sequences. Dogrel finished with Dublin City Sky, an acoustic ballad which conjured up images of a homely old pub and freshly pulled pints of Guinness, like a Pogues record (their favourite band). A Hero’s Death closes with No, another stripped back ballad, à la Oasis this time, which substitutes post-punk pessimism for lighter optimism, punctuated with the phrase “Please don’t lock yourself away just appreciate the grey”. Hard-hitting and brilliant. – Marc Zisman