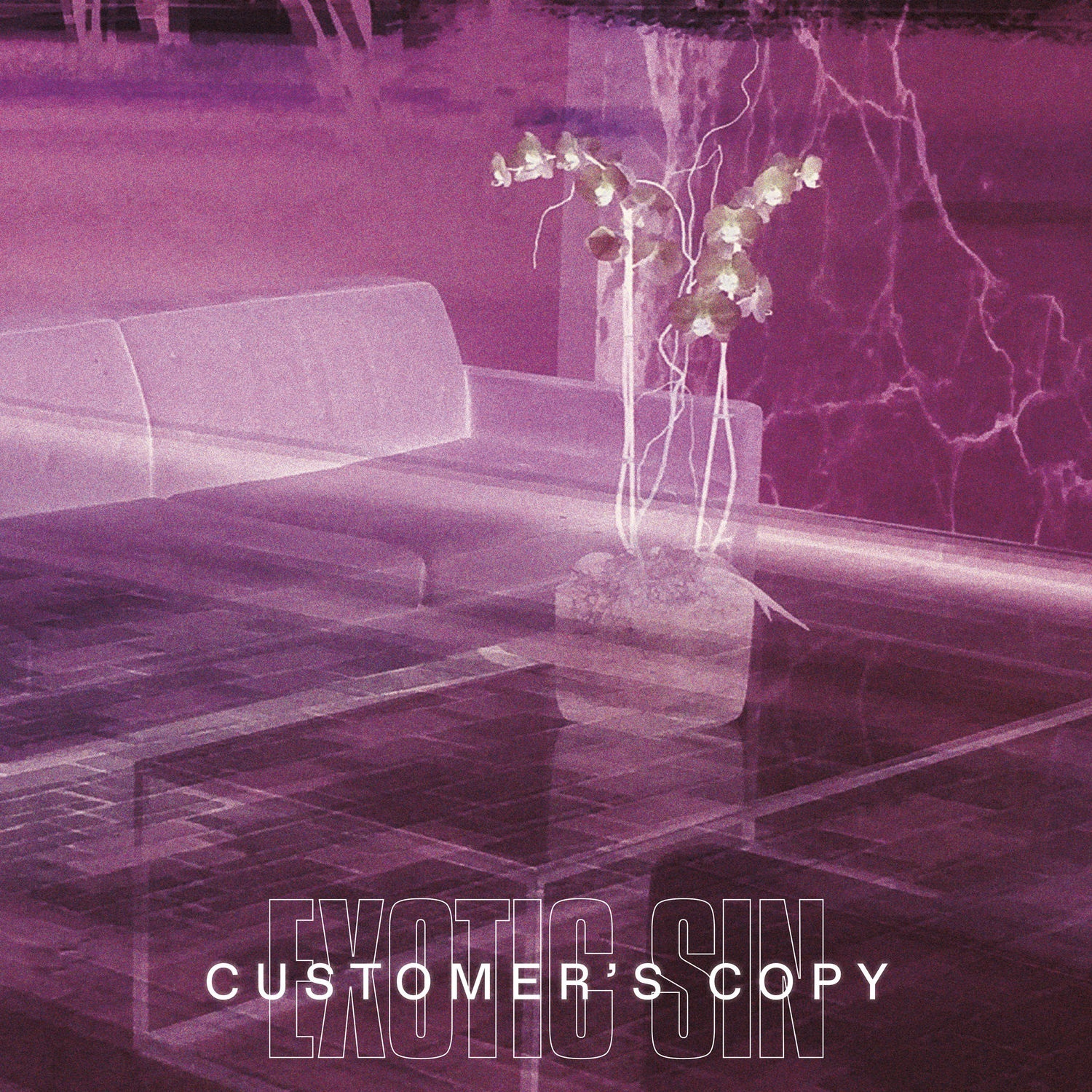 It’s difficult to talk about Exotic Sin, the duo of Naima Karlsson and Kenichi Iwasa, without discussing Karlsson’s prestigious musical bloodline. Her father, Bruce Smith, drummed for The Pop Group, the Slits, and Public Image Ltd; her mother is Swedish singer Neneh Cherry. The spare and spontaneous music on their debut album, Customer’s Copy, on the other hand, draws upon the legacy of her grandparents, Don and Moki Cherry. Don Cherry first made his name in jazz circles alongside Ornette Coleman, but he soon struck out for a rapturous mixture well outside of the tradition. Combining free improvisation, folk, traditional music, and drone, Cherry and his wife pulled from all corners of the globe to make and live their art. That the duo first performed together at a performance celebrating the Cherrys’ unique amalgam of art and music is fitting.

Customer’s Copy is the debut LP of contorted cosmic jazz and eccentric minimal electronics by Exotic Sin. The duo of Naima Karlsson and Kenichi Iwasa first came together for a performance celebrating the art and music of Karlsson’s grandparents, Moki and Don Cherry, before continuing as an independent unit that still incorporates some of the Cherrys’ instruments as well as their synergetic integration of music with artistic practice.

“Preferring the stark contrast of analog/digital, acoustic/electric, and natural/unnatural sounds, Karlsson contributes synthesizers in addition to piano, celesta, and bells, while Iwasa collides anachronistic 90s Yamaha keyboard and guitaret with contrabass recorder, drums, kalimba, and three of Don Cherry’s instruments: one of his trumpets as well as two of his “zen saxophones,” handmade woodwinds appending reed mouthpieces to plastic plumbing parts, also called Don’s kettles after their highpitched sound. With such timbral juxtapositions, the spirit of Exotic Sin is reminiscent of a number of leftfield jazz-meets-electronics ‘70s duos from Don Cherry’s maverick collaborations with Jon Appleton and Terry Riley to Anthony Braxton’s work with Richard Teitelbaum, İlhan Mimaroğlu and Freddie Hubbard’s Sing Me a Song of Songmy, and Muhal Richard Abrams’ electronic works.

On album opener “Dot 2 Dot,” Karlsson’s measured, monastic piano sets an elegiac stage for kettle bends and absurdist electropercussive filtering courtesy of Iwasa before a flourish of cascading ebonies and ivories together with restorative circular trumpet motifs bring the sidelong piece to a majestic resolution. Named after the character from Ridley Scott’s 1989 film Black Rain, the schizosphere of “Charlie Vincent” interfaces ominous, dystopian synthesizer with permuted organ swells before album closer “Canis Minor” sets gentle sail for a distant bed of lonesome stars. A visual artist as well as an archivist and coordinator for the Cherry estate, Karlsson continues to learn and study Don’s compositions and approach to piano with her uncles Eagle-Eye and David, who were taught by Don himself, and his use of short piano compositions as loose scaffoldings for improvisation is prevalent across the record’s three otherworldly unfurlings. Improvisor and multidisciplinary artist Kenichi Iwasa is also known for his legendary Krautrock Karaoke night, his contribution to Beatrice Dillon’s 2020 album Workaround, and collaborations with visual artists and musicians from Linder Sterling to members of Can, Neu!, Faust, Cluster, and Wire. Recorded and mixed, with additional alto flute, woodwinds, and contrabass recorder by Robbie Lee.”